Dice was a Swedish symphonic-rock band that released a self-titled album on Marilla in 1978. In 1992, the band’s lost 1977 album Four Riders of the Apocalypse was issued by Belle Antique.

Dice germinated from a friendship between Stockholm schoolmates Leif Larsson (keyboards) and Örian Strandberg (guitar). Their combined affinity for classical and rock was spurred further along by the maximalist integration of the two styles in the late 1960s.

By 1973, the pair had composed the bulk of their two epic suites: Four Riders of the Apocalypse and Follies. Around this time, they were joined by drummer/lyricist Per Andersson. Bassist Fredrik Vildö completed the lineup after seeing their ad in a local paper. The band spent 1975/76 honing their material in a rehearsal space that they shared with fellow up-and-comers Horizont. 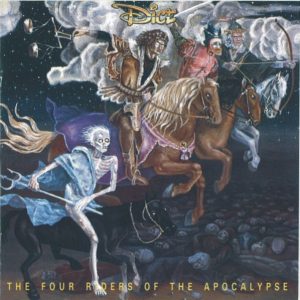 Dice recorded Four Riders of the Apocalypse at Frescati in January 1977. It features two four-part suites: the 11-minute War (1st Impression) and the 12-minute Death (4th Impression). Impressions 2 and 3 are the medium length numbers “Disease” and “Greed.” Larsson plays an arsenal of keyboards, including WLM-organ, Korg synthesizer, and the Hohner pianet. Andersonn’s percussive setup includes timpani and glockenspiel. Vildö plays Fender and Rickenbacker basses. The recording was shelved at the time but finally released in 1992 by Japanese specialists Belle Antique with a cover painting by Strandberg. 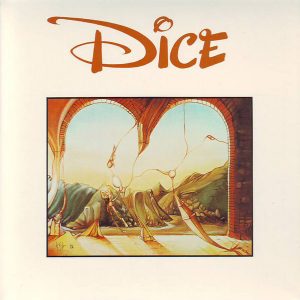 Dice’s sole release from this period was their 1978 self-titled album on Marilla. Side one features four songs, including “The Venetian Bargain,” “The Utopian Suntan,” and “Annika.” The six-part Follies suite consumes all 22 minutes of side two. The band are joined on this recording by singer/saxophonist Robert Holmin.

Dice was later issued on CD by Belle Antique, which has also issued two archival live discs of the band: Live Dice, which features a mix of familiar and unrecorded material performed by the Holmin lineup; and Live 1977, which features numbers from both albums mixed with interview snippets.

In 1982, the original four-piece resurfaced under the name Kramp for the single “Skrattlåten” on their eponymous one-press. During this period, Larson joined Pugh Rogefeldt’s backing band Trousers for a string of EMI singles. Strandberg, in turn, backed Larson on a 1983 EMI single. Andersson surfaced later that decade in Efva & The Sadboys.