Culture Club are an English pop band that was primarily active as a recording unit during the early–mid 1980s. The band achieved world renown with a string of hits in the pop/rock and blue-eyed soul veins.

The band was founded by clubgoer/aspiring singer George O’Dowd following a brief stint with Bow Wow Wow, with whom he performed under the alias Lieutenant Lush. Moss had drummed for the bands London and The Edge in addition to brief stints with The Damned and Adam & the Ants. With Craig and eventually Hay in the fold, the band settled on the name Culture Club to reflect the cultural, national, and religious diversity of the members. To avoid confusion over his androgynous style of dress, O’Dowd adopted the stage-name Boy George.

Securing a deal with Virgin Records, Culture Club tested waters during the summer of 1982 with the clean, percussive funk-pop of “White Boy” and the tropical steelpan flavors of “I’m Afraid of Me” before breaking globally with the slow, sensitive lovers rock of “Do You Really Want to Hurt Me?” Impressed beyond expectations, the label greenlighted the band’s first album, Kissing to Be Clever. 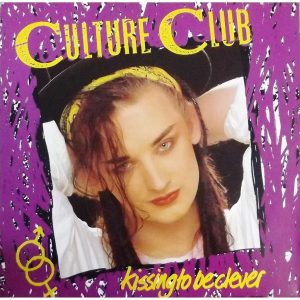 Augmented by studio horns and tuned/untuned percussion, Culture Club exercise their cross-cultural musical eclecticism across the nine tracks that comprise the LP. Exoticism is invoked in the harmony-laden, safari-spiced “You Know I’m Not Crazy” and in the quirky Caribbean tap dance “I’ll Tumble 4 Ya.” The latter — with its circus-trumpet intro, curvlinear bass-steered verses and dizzying far-chorded middle — consolidated the band’s transatlantic conquest.

With maximum clarity afforded by producer Steve Levine, Culture Club exhibit instrumental and vocal mastery in “White Boys Can’t Control It,” where open chords and echoey backing vocals are driven along by slapped bass and strummed guitar amid flares of brass and harmonica. Elsewhere, the synth-bass shakedown “Take Control” rides a sonic subway of sheet-metal percussion. The rattling cymbals and windy, circular chordal pattern of “Love Twist” surrounds an enraptured vocal delivery, bisected with a toast from Captain Crucial.

For the 1982 holiday season, Culture Club gifted listeners with “Time (Clock of the Heart).” With its shimmering Philly strings and glockenspiel/Coral sitar theme, the poignant ballad became a global smash. 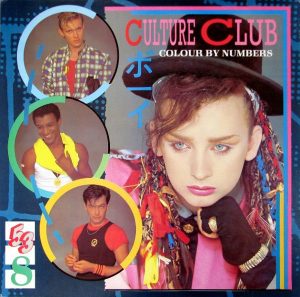 With the world at its knees, Culture Club made their grandest statement with Colour by Numbers — a lavish tour de force on which the band are embellished with a vast plethora of instruments, multi-layered vocals, and production treatments. The album is named in ode to the band’s colorful dress sense, as displayed on the cover courtesy of famed fashion photographer Jaime Morgan.

Sounding off this set is the flying French harp and perky tambourine/kick-drum beat of “Church of the Poison Mind,” where belter Helen Terry pulls the chorus out to sea each time George croons the title. Kaleidoscopic detail is afforded to the next track “It’s a Miracle”, on which buoyant tuned-percussion frames a string of alternating verses in semi-through-composed form. As a song of contrasts, the wind-tunnel sustain that engulfs the genius line “dreams are made of emotions” are contrasted by Terry’s soulful wails over the trebly middle-eight bassline.

Lyrically, George conveys meaning through metaphor amidst the myriad musical features, such as with the alarming brass and muted reggae verses of “Mr. Man,” where George faces down a belligerent character with an emphatic chorus. Elsewhere, the galloping bass and vocally layered buildup of “Karma Chameleon” shine light on the woes of deception.

Eclecticism and virtuosity are displayed across numerous tracks, such as on the sleek jazz-pop of “Changing Every Day,” which ascends with a fluid sax solo courtesy of Steve Grainger. On the harmony-rich, minor-chorded funk of “Miss Me Blind,” Hay unleashes a fiery fuzzed-out solo amid an army of percussion.

Classicism is masterfully harnessed on the album’s closing track. Ushered by plunging Steinway keys, the ivory filigree of “Victims” weaves around line after line of romantic symbolism. Once the emotional effects have taken hold, cannonball toms signal a flow of strings and choral vocals that rise and crest across miles of symphony-swept valleys.

Worn by the global rush of touring and promotional obligations, Culture Club were somewhat fatigued by the time of their next round of recording sessions. Consequently, Waking Up With the House on Fire (1984) shows the strain. 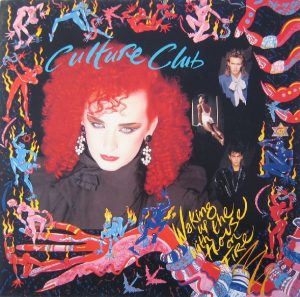 On the upside, the chime en-swirled slow-dance “Mistake No. 3” brings the ’70s soul ballad into a contemporary sonic framework, while the serviceable soul-funk of “Don’t Talk About It” gives vent to an expressive E-bow guitar solo. Meanwhile, the earnest declarations of the angular anti-march “The War Song” are lilted with backing vocals from Clare Torry, whose “Great Gig In the Sky”-style wails can be heard over chants across the monochordal middle.

Had Culture Club been allowed to include their contributions to the 1984 Electric Dreams soundtrack — the mournful, minor-chorded “Love Is Love” and the sparse, vocally impassioned “The Dream” — the band could have had a stronger third album. The effects-laden, foreign-language sojourn “Don’t Go Down That Street” — a concurrent b-side — could have added further nuance and solidity.

Beset with inner-conflicts, Culture Club imploded upon the release of their strained fourth album From Luxury to Heartache in 1986. Rebounding from personal woes, George launched a semi-successful solo career the following year and subsequently parlayed into DJing work. From the late-’90s onward, the band has sporadically regrouped both with and without its classic lineup.