Cornucopia were a German symphonic-psych band that released the album Full Horn on Brain in 1973.

Cornucopia formed in Hamburg in 1972. None of the seven members had any prior recording credits. They were augmented by producer/guitarist Jochen Peterson, who hailed from the 1971 one-off Ikarus and also played on albums by Tomorrow’s Gift, Wind, and Achim Reichel. 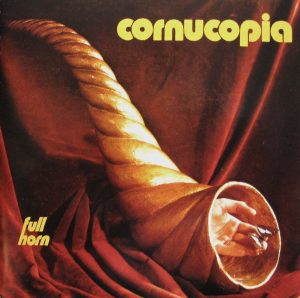 Cornucopia released their singular album, Full Horn, in May 1973 on Brain/Metronome. The first side consists of the 19:50 eight-part epic “Day of the Daydream Believer.” Side two contains three songs: “And the Madness,” “Morning Sun (Version 127),” and the 12-minute “Spot on You, Kids.” Keyboardist/guitarist Christoph Hardwig is credited as the sole composer of all four songs. It was recorded between September 1972 and February 1973 at Windrose-DuMont Time Studio, Hamburg.

Allegedly, the band did little to promote Full Horn and disbanded in early 1974 after the album failed to launch on its own quality. It has since been hailed as a ’70s German masterpiece, rivaling contemporary titles by Eiliff, Grobschnitt, and Thirsty Moon. None of the members resurfaced except percussionist Rudy Holzhauer, who co-produced two 1977/78 albums by Hamburg punks Big Balls & The Great White Idiot.

Peterson subsequently joined Randy Pie and played on albums by Scope, the Release Music Orchestra, and Blonker. Full Horn was first reissued in 1995 on Germanofon and has since received five further repressings, including two on Repertoire Records.