Container were a Swiss jazz-rock band band that released a self-titled album in 1976 on local-press Image. Three of the members hailed from the Jazz Rock Experience. Saxophonist/keyboardist Bruno Spoerri became a prolific electronic musician.

Spoerri had been active on Zürich’s jazz and electronic scenes since the mid-1960s. He first teamed with Bertschinger and Foletti in the Jazz Rock Experience, which released an acronymous longplayer in 1970. 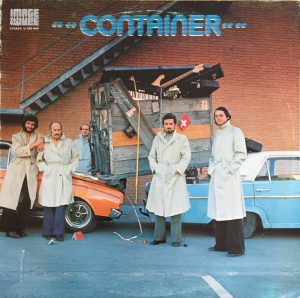 Container’s singular, self-titled album appeared in 1976 on the Image label. On “Schnall di aa,” Thomas Moeckel’s windy legato lines weave around an odd-metered pattern that hovers at C-minor. A series of tom-rolled key changes follow before the main pattern reasserts and Bertschinger is given room to stretch on the Rhodes. In just under four minutes, the sequence of trade-offs grows evermore intense.

The samba-spiced rhythms of “The Boy from Panama” allow Spoerri to demonstrate his tonal fluidity across an arsenal of woodwinds. Though initially subdued and creamy, Bertschinger’s Rhodes soon awakens with arpeggios aplenty.

“Brainhunter” establishes accented thirds in the key of F. Almost immediately, Foletti’s darting wah-bass triggers and halts the track’s signature ARP lick. In the left channel, Moeckel drills forth with a muted, scratchy riff of dominant fours and fives over the root chord.

“Gargantua” evolves from a calm pool of Rhodes to a brisk stream of muted sax, hollow-bodied guitar licks, and earworm ARP/Freeman tones. The locked, circular groove of “Mackintosh” gives further time to the fretboard fluidity of Moeckel and the effects-laden sonic imprints of Spoerri.

Post-Container, the guitarist was intermittently active, but Spoerri remained prolific in the areas of electronic and library music. His futuristic 1978 release Voice of Taurus has become a cult favorite in the 21st century.

Mo
Mo was the performance moniker of Moe Whittemore, an American musician from Indiana who ran the Ne...
Hyldemor
Hyldemor were a Danish psych-rock band from Copenhagen that released the album Glem det Hele on C...
Crawler
Crawler were an English/American hard-rock band that evolved out of Back Street Crawler following ...
Piirpauke
Piirpauke are a Finnish ethno-jazz/rock band from Piippola, Pohjois-Pohjanmaa, that released two ...
Steve Marcus
Steve Marcus (Sept. 18, 1939 — Sept. 25, 2005) was an American saxophonist from N.Y.C. Discograp...