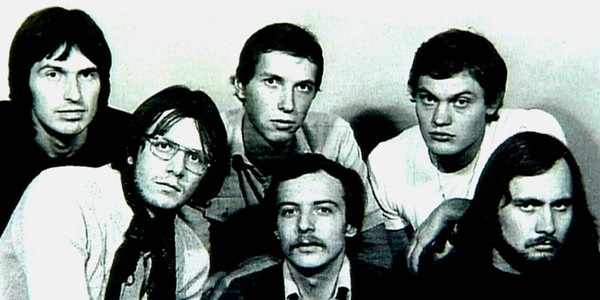 Combo FH were a Czech avant-garde/jazz-rock band that existed for 12 years, starting in 1974. The band debuted in 1976 with a three-song EP, released as part of Panton’s Mini Jazz Klub series. A break of four years preceded a 1980 single release on the label, followed in 1981 by the popular album Věci (Things). A further break of five years followed before the band’s second and final full-length, Situace na Střeše, appeared in 1986.

Impuls
Impuls were a Czech jazz-rock band from Praha that was active during the second half of the 1970s,...
Ota Petřina
Ota Petřina was a Czech guitarist, vocalist, composer, and bandleader who recorded two albums and ...
Gattch
Gattch were a Slovak jazz-rock/psych band from Bratislava, active from 1969 to 1974. In 1971, the ...
Pražský Výběr
Pražský Výběr were a Czech art-rock band that was active through several iterations across three d...
Fermáta
Fermáta are a Slovak jazz-rock band from Bratislava, formed in 1972. The band released seven album...