Colosseum II was an English jazz-rock band that released the album Strange New Flesh on Bronze in 1976, followed by Electric Savage and War Dance on MCA in 1977. They also backed Andrew Lloyd Webber on his 1978 classical-rock album Variations. The band was a followup to Colosseum, which drummer Jon Hiseman led from 1968 to 1971. On this second go-round, the focus was breakneck instrumentals with the occasional vocal number.

Colosseum II was formed in 1975 by drummer Jon Hiseman, who wished to advance the jazz-rock experiments of his earlier band, Colosseum. But whereas that band came from the blues-based brass-rock angle (ala Keef Hartley Band, Greatest Show on Earth), this new band was modeled on the leaner, filigree-laden style of Return to Forever. To that end, Hiseman recruited keyboardist Don Airey, bassist Neil Murray, and Irish guitarist Gary Moore.

Hiseman’s career stretched back to the mid-1960s, when he replaced Ginger Baker in a late-stage lineup of the Graham Bond Organization. From there, he and GBO multi-reedist Dick Heckstall-Smith briefly joined John Mayall’s Bluesbreakers, then formed Colosseum, which released three albums and a live double between 1969 and 1971.

Moore first recorded as a teenager in Dublin blues-rockers Skid Row. After working as a session player (Dr. Strangely Strange, Jonathan Kelly), he debuted as a solo artist with the 1973 CBS release Grinding Stone. He then put solo work on hold to start an on-off relationship with Thin Lizzy, appearing on their 1974 album Night Life and serving intermittently as their touring guitarist.

Murray was a founding member of Canterbury jazz-rockers Gilgamesh, but left before their first album. He played on the 1974 Manticore release Magic Dragon by funksters Hanson. Just as Colosseum II was getting underway, he (along with Airey) played on the Babe Ruth swan song Kid’s Stuff. Airey hailed from Cozy Powell‘s Hammer. 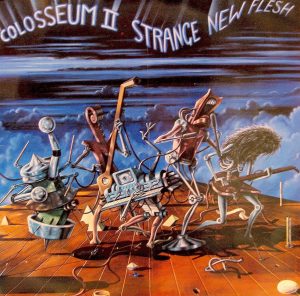 Colosseum II released their debut album, Strange New Flesh, on Bronze in 1976 (UK, Europe, Japan, Oceania). It opens with “Dark Side of the Moog,” a blazing Airey/Moore instrumental that flashes their chops while title-spoofing a certain Pink Floyd album with Airey’s choice of instrument.

Airey contributed the midsection on “Down to You,” an elongated cover of the Joni Mitchell composition from her 1974 album Court and Spark. In the song proper, Moore’s lyrical sustains enmesh with misty, whirling synths. Then comes Don’s showcase: a passage of Di Meola-like Spanish guitar and classical piano filigree, followed by a turbo-charged, chromatic roller-coaster sequence of Hammer-like runs.

Musically, Strange New Flesh is similar to contemporaneous fusions of jazz-rock, hard-rock, and funk by RTF (No Mystery), Iceberg (Tutankhamon, Coses Nostres), and Ayers Rock (Beyond).

Hiseman produced Strange New Flesh at Roundhouse Studios, established in 1975 by Bronze founder Gerry Bron as an extension of the label. The album was engineered by the team of John Gallen and Trevor Hallesy, who both worked on Kid’s Stuff and the soundtrack to season one of the ITV musical drama Rock Follies. They also worked on 1976 titles by Tarney & Spencer, Water, and Bronze labelmates Osibisa and Uriah Heep.

Also in 1976, Colosseum II appeared on Stereo Pop Special-128, a split release with the Michael Chapman Band, released on BBC Transcription Services. Colosseum II occupy side two with a pair of otherwise unavailable tracks: “The Awakening,” an eleven-minute pyrotechnic rocker with high-velocity, staccato fretboard runs; and “Siren Song,” a fifteen-minute epic that shifts through spacey passages, martial patterns, and eerie sound effects. Both tracks, along with early demos and alternate takes, were later issued on expanded two-disc reissues of Strange New Flesh.

In late 1976, Starrs left Colosseum and moved to Germany, where he replaced John Lawton in Lucifer’s Friend for their 1978–80 albums Good Time Warrior and Sneak Me In.

Murray jumped ship to National Health and played on their debut album, then joined Whitesnake for a six-year run. He also played on John Martyn‘s 1977 release One World. During the 1980s, he played on albums by Cozy Powell, Graham Bonnet, Jon Lord, Randy California, and reunited with Moore on the 1982/83 titles Corridors of Power and Victims of the Future. Mid-decade, he partook in the symphonic hard-rock all-star project Phenomena.

Colosseum II continued as a four-piece with bassist John Mole and switched labels to MCA. They recorded their second album at Morgan Studio 1 during the winter of 1976/77. 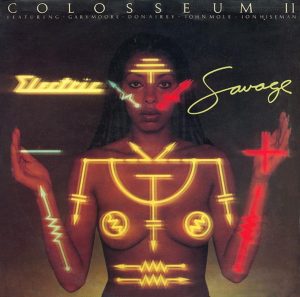 Colosseum II released Electric Savage — their second album and first as a four-piece with Mole — in early 1977 on MCA (worldwide). Moore co-wrote all four tracks on the first side: one with Airey (“The Scorch“) and three with Hiseman (“Put It This Way,” “All Skin and Bone,” “Rivers”). Side two contains the group-arranged traditional “Lament” and another Moore/Hiseman cut, “Desperado.” Airey composed the final two tracks, “Am I” and “Intergalactic Strut.”

Sleeve artist John Pasche designed the cover: a nude ebony woman illuminated with neon lines and bolts (the “electric savage”). Pasche designed additional eye-fetching album visuals on 1976/77 albums by Hummingbird (We Can’t Go On Meeting Like This), Judas Priest (Sad Wings of Destiny), Neil Ardley (Kaleidoscope of Rainbows), Patrick Moraz (The Story of i), and Van Der Graaf (The Quiet Zone / The Pleasure Dome). The model was photographed by Phil Jude, who also captured images for the Ardley, Boyle, and Moraz titles, plus albums by Automatic Fine Tuning, Budgie, Isotope, Kraan, and Seventh Wave.

The back of Electric Savage features tinted performance pics of each member, taken by rock photographer Peter Smith, responsible for the cover image on the original Colosseum’s 1969 second album Valentyne Suite. 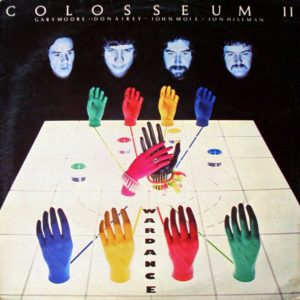 Colosseum II’s third album, War Dance, appeared in late 1977 on MCA. Airey composed the titular grand opening number and the spacey side two sequence “Mysterioso” and “Quasar,” linked as a medley with Mole’s “Star Maiden.” Mole and Moore created “Major Key,” marked by a searing theme atop a modulating sequence of chordal passages.

Moore and Hiseman composed the outro “Last Exit” — on which a sparkling fugue cascades over crying, lyrical fretboard passages — and the album’s hard-rocking interior: “Put It That Way,” “Fighting Talk,” and the speedy, galloping “The Inquisition,” spiked with another soaring, nonstop lead.

Side one concludes with an uncharacteristic Moore/Hiseman number, the emotive ballad “Castles,” where humble verses swell to a flowing chorus in heavenly C major-seven, propelled by rippling organ and Moore’s poignant refrain:

They originally demoed “Castles” in 1975 with Starrs. That version (contained on deluxe reissues of Strange New Flesh) runs eleven minutes with strident guitar solos over a rhythmic, mid-tempo arrangement.

The War Dance cover, designed by Geoff Halpin with photographer Paul Wakefield, shows the band looking on as colored, disembodied hands square off at opposite ends of a table where two hands engage at the center. On the back, the hands dance in single file along the table circle.

Jon Hiseman and Barbara — along with trumpeter Ian Carr (Nucleus) — appear on four 1977–81 albums by the United Jazz+Rock Ensemble. He joined Paraphernalia for their 1979 MCA release Wilde Tales, producing that and his wife’s subsequent projects, including the 1982 album Ghosts, her collaboration with Rod Argent. Meanwhile, Barbara, Hiseman, and Mole played on the London cast recording of Cats, the 1981 musical by Lloyd Webber.

In 1983, Barbara, Hiseman, Argent, and Mole formed Shadowshow with guitarist Clem Clempson from the first Colosseum. Their self-titled album, which features a guest appearance by David Sancious, appeared that year on TM Records, the home of Barbara’s subsequent output. In 1994, they reunited the 1970–71 lineup of Colosseum for two decades of live activity.

Don Airey played on the 1979 solo album And About Time Too by guitarist and ex-Babe Ruth colleague Bernie Marsden, by then a member of Whitesnake with Murray, who also appears along with Jack Bruce, Ian Paice — who Marsden supported in Paice Ashton Lord — and Cozy Powell. Marsden returned the favor on Over the Top, Powell’s 1979 Ariola release with backing by Airey, Bruce, Clempson, Moore, and Cozy’s old mate from the Jeff Beck Group, keyboardist Max Middleton (Hummingbird).

That same year, Airey joined Powell in Ritchie Blackmore’s Rainbow, replacing keyboardist Tony Carey (Planet P Project) for that band’s fourth studio album Down to Earth. Airey stayed for the 1981 followup Difficult to Cure, the first with singer Joe Lynn Turner. During the ’80s, Airey backed Powell on two further releases and played on the first and third solo albums by Ozzy Osbourne. He reunited with Moore, Murray, and Paice for one track (“Falling In Love With You”) on Corridors of Power.

In 1985, Airey played on the second album by Marsden’s Alaska (The Pack) and appeared alongside bassist Glenn Hughes on Moore’s Run for Cover. Airey — along with Hughes, Murray, Powell, and original Fleetwood Mac guitarist Peter Green — perform on Phenomena, which limits Green’s role to backing vocals.

Gary Moore resumed his solo career with the 1978 MCA release Back On the Streets, which features Airey and Mole on four tracks, including the Colosseum II-style instrumentals “Flight of the Snow Moose,” “Hurricane,” and “What Would You Rather Bee or a Wasp.” He briefly rejoined Thin Lizzy for their 1979 album Black Rose (A Rock Legend) and played on Phil Lynott’s 1980 release Solo in Soho. Between those projects, Moore formed G-Force, an LA-based hard-rock band that initially featured Hughes. The album G-Force appeared in 1980 on Jet Records.

The first release of Moore’s ’80s-era solo run, Corridors of Power, appeared on Virgin in 1982, followed by the unvaulted Dirty Finger and a sequence of top-selling albums on Virgin-subsidiary 10 Records, including Victims of the Future, Run for Cover, and Wild Frontier.

Dennis Wilson
Dennis Wilson (Dec. 4, 1944 — Dec. 28, 1983) was an American musician from Inglewood, Calif., best...
X-Ray Spex
X-Ray Spex was an English punk-rock band from London that issued the single "Oh Bondage Up Yours!"...
Chris Youlden
Chris Youlden is an English blues-rock singer who sang in the second lineup of Savoy Brown from 1968...
Wayne Shorter
Wayne Shorter (born Aug. 25, 1933) is an American saxophonist from Newark, N.J., who co-led the ja...
Rose
Rose were a Canadian rock band from Barrie, Ont., that released the folk-pop/harmony album Hooked...