Cleves was a New Zealander psych-rock band that released a self-titled album on Festival-subsidiary Infinity in 1971.

Cleves revolved around the musical Brown siblings: brothers Ron (guitar, vocals) and Graham (drums) and their sister Gaye (organ, vocals). They first performed during the mid-1960s as The Clevedonaires, named after their hometown of Clevedon, south of Aukland. The band played the NZ club circuit and made several TV appearances. Between 1966 and 1968, they issued four beat-inspired singles on the Impact label.

In late 1968, the band relocated to Australia and shortened their name to Cleves. They issued three singles over the ensuing two-year period, including a soundtrack EP of four one-minute songs for the Scope Film production A Taste of Energy. 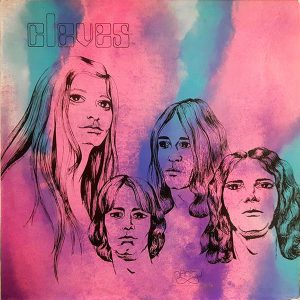 In 1971, Cleves released their singular album on Infinity. Of the eight tracks, seven are originals, including “Time Has Come,” “There Is a Place,” “Keep Trying,” and “Work Out.” The album was produced by Richard Batchens (Lobby Loyde, Tymepiece, Blackfeather, Sherbet). None of the band’s 7″ sides are included on this release.

Soon after the album’s release, Cleves decamped to England, where a series of drummers filtered through the lineup in short order. Guitarist Vince Melouney (Bee Gees, Fanny Adams) was briefly a member. Another name change, this time to Bitch, preceded two singles on Warner Bros. in 1972/73. Gaye also issued a solo single — “Let a Little Love Come In” (b/w “Minstrel Song”) — on Anchor in 1974.