Catapilla was an English jazz-rock/psych band that released two albums on the Vertigo “swirl” label in 1971/72. They fused post-psych effects with jazz-based improvisation in a similar manner to Affinity and Tonton Macoute.

Catapilla evolved from Angst, an unsigned jazz-rock band formed in early 1969 by drummer Louis LaRose. After a year of lineup fluctuation, the only constant was saxophonist Robert Calvert (not to be confused with the namesake poet–singer in Hawkwind).

Calvert (b. 1944, Chilwell, Nottinghamshire) was a nine-year veteran of the live circuit. In 1955, his family migrated to Melbourne, Australia, where he played in assorted rock ‘n’ roll and beat bands between 1961 and 1966. At age 22, he returned to the UK and joined Thackary, an unsigned jazz-psych act based in London. They gigged for a year and shared stages with Joe Cocker, Traffic, Taste, and Fairport Convention, but didn’t land a contract.

Eaglestone suggested a new name, Catapilla Yellow. Noting the popularity of rock mononyms (Argent, Cressida, Family, Gracious, Man, Renaissance, Supertramp, Trapeze) the band settled on Catapilla, a “made up word for a band that made up its own music.”

Just as Catapilla hit the club circuit, Meek’s boyfriend deemed the band ill-suited for her voice. They replaced her with Jo’s sister Anna Meek, who claimed she was unaware of Jo’s involvement.

Catapilla signed a management deal with Cliff Cooper of the Orange Music Electronic Company, makers of the Orange amplifier. He arranged a showcase event where the band performed before industry insiders, including Black Sabbath manager Patrick Meehan, who secured Catapilla a deal with Vertigo Records. 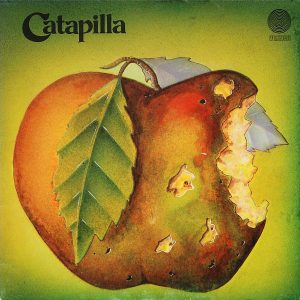 Catapilla released their self-titled debut album in late 1971 on the Vertigo swirl label. Side A features the 15-minute “Naked Death” and two shorter tracks, “Tumbleweed” and “Promises.” The 24-minute “Embryonic Fusion” consumes all of side B. All four pieces are credited to Meek, Wilson, Frith, Calvert, and Reinhardt.

Meehan produced Catapilla with engineer Louis Austin (Deep Purple, Orang-Utan, Mainhorse, Flash). Original copies come in a gatefold sleeve with un-credited artwork. The front shows a quarter-consumed apple, devoured at both ends on the back. The inner-spread shows a leafy silhouette of a full apple with the members and credits grouped inside.

“Promises” appears on The Vertigo Trip, a 1971 four-sided label comp released in Oceania with tracks by Warhorse, Nucleus, Magna Carta, May Blitz, Clear Blue Sky, Gravy Train, Beggars Opera, Patto, Gentle Giant, and Nirvana. It sports a lime-tinted cover with a naked hippie woman mounted on a wooden baby horse. “Embryonic Fusion” also consumes side B of a split release with Ian Carr, issued on Vertigo as a white label promo LP.

The band promoted Catapilla with a Vertigo-sponsored tour, which paired them with Graham Bond and Roy Harper. Within months, musical differences spurred the exit of Eaglestone, Frith, Rheinhardt, and Taylor. Catapilla regrouped with bassist Carl Wassard, drummer Bryan Hanson, and keyboardist Ralph Rolinso. 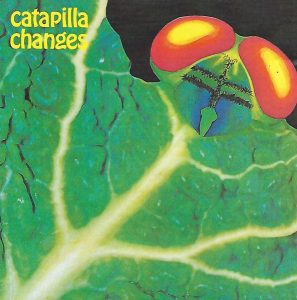 Catapilla’s second album, Changes, appeared in June 1972 on Vertigo. Each side starts with a 12-minute piece (“Reflections,” “Thank Christ for George”) and follows with a track at 6:45 (“Charing Cross,” “It Could Only Happen to Me”). Wilson and Calvert co-wrote ICOHtM and collaborated with Meek on the other three.

Changes was produced by Colin Caldwell (Curved Air, Groundhogs, C.O.B., Keef Hartley Band). The gatefold sports a die-cut front with a green caterpillar peeking over a kale leaf. The inner-fold shows the caterpillar aglow against a black backdrop. It was designed by photographer Martin Dean, brother of album artist Roger Dean (Yes, Greenslade, Osibisa, Uriah Heep). He would also collaborate with his brother on covers for Badger, Budgie, Lighthouse, and Atomic Rooster.

Calvert played on the 1975 release SME + = SMO by the Spontaneous Music Orchestra, which also features drummer John Stevens. Calvert subsequently played on four late-’70s free-jazz albums by John Stevens’ Away. A decade later, he surfaced in the Gong-offshoot Mother Gong.

Taylor surfaced with drummer Clive Brooks (Arzachel, Egg) in the hard-rock combo Liar, which issued 1977/78 albums on Decca and Bearsville.

Jo Meek issued two 1971 solo singles and sang (as Lady JoMeek) on the album Waiters on the Dance by keyboardist and sci-fi author Julian Jay Savarin. That same year, she sang backing vocals on the UA release Clowns by composer/conductor Ed Welch, who also employed Cozy Powell and Michael de Albuquerque for the project.

Cooper went on to manage the early career of musician and singer John Miles, who issued numerous pre-album singles on the Orange label.