Carson were an Australian blues-rock band from Melbourne that released two singles on the specialty labels Rebel and Havoc circa 1970/71, followed by two albums on Harvest in 1972 and 1973.

Carson formed in 1970 as the Carson Country Band by a loose-nit group of Melbourne-area musicians. Their first single, “On the Highway” (b/w “Resting Place”), was issued that year on Rebel. In 1971, the band shortened its name to Carson and released the Havoc single “Travelling South” (b/w “Moonshine“). 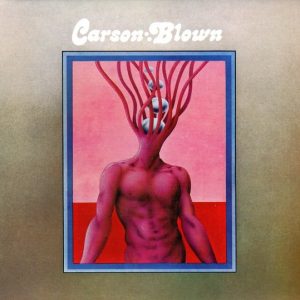 By 1972, the lineup cemented around English-born vocalist Broderick Smith; Kiwi musicians Mal Logan (keyboards) and Gary Clarke (bass); and locals Greg “Sleepy” Lawrie (bottleneck, dobro), Ian Winter (guitar), and Tony Lunt (drums). It was this lineup that recorded the album Blown, released in 1972 on Harvest. It features seven originals, including “Rock and Roll Game,” “Banana Power,” “Better Times Will Come About,” and “Boogie.” The last of those was released as the band’s third single, split over two sides of a Havoc 7″. The album was produced by Rod Coe, whose contemporary activity includes albums by Pirana, The La De Das, Lizard, and Shona Laing; he later produced ‎Redhouse and The Saints.

The following January, Carson taped their performance at Sunbury ’73. The six-song show was released by Harvest as On the Air. The album features three originals unique to this release: “Dingo,” “Laid-back Feel,” and “Sunberry Jam.” In 2020, the album was re-released as a two-disc set titled On The Air (Recorded Live 1970 – 1973), which adds material from seven other concerts.

Smith released three albums with rustic-rockers The Dingoes between 1974 and 1979 and subsequently recorded as a solo artist. He was briefly joined by Logan, who left The Dingoes after their first album for stints in the Renee Geyer Band and the Little River Band. Winter cut two albums with Daddy Cool in 1972/73. Lunt cut two singles with Buster Brown in the mid-70s and played in the short-lived act Alta Mira along with Logan and a pre-Be-Bop Deluxe Charles Tumahai. That band contributed one song, “My Soul’s On Fire,” to the 1973 multi-artist release Garrison The Final Blow Unit 2.