Byzantium was an English rustic-rock band that released the 1972/73 albums Byzantium and Seasons Changing on A&M, followed by a self-issued demos album. They were formed and managed by ex-Ora songwriter and frontman Jamie Rubinstein.

Rubenstein hailed from Ora, a folk-pop combo that cut an album of demos in 1969 for Tangerine Records. Dissatisfied with the experience, he briefly exited music before linking with Ramsden. They commenced a series of Sunday sessions where Rubenstein presented his latest songs.

The new five-piece named itself Byzantium after the Eastern Roman Empire that reigned from Late Antiquity to the Middle Ages. A rapturous Sunday gig at London’s Roundhouse affirmed their convictions. However, Rubenstein decided he preferred working from behind the scenes. Meanwhile, Baxter left for a role in the rock musical Hair. 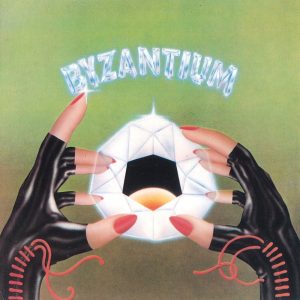 Byzantium released their self-titled debut album in September 1972 on A&M (UK) and Warner Bros. (US). Rubenstein wrote six of the eight songs, including all of side one and the core of side two.

“What Is Happening?,” the funky mid-tempo rocker that opens the album, segues into the slow, airy effervescence of “I Am a Stranger to My Life.” Buoyancy abounds on the fingerpicking “Come Fair One” and “Baby I Can Hear You Calling Me,” which intensifies from twin-lead interplay to a speedy climax over the course of five minutes. CSN-style spectrum harmonies form layers across all tracks.

Lamble contributed “Trade Wind,” the stark acoustic short that heralds side two. A further pair of Rubenstein numbers — the pastoral, minor key “Into the Country” and the swinging brass romp “Lady Friend” — precede Jankel’s closing epic “Why Or Maybe It’s Because,” a swelling string-swept ballad that morphs into a terse piano/cello march.

Lamble plays violin on “Into the Country.” Rubenstein plays acoustic guitar on “Come Fair One,” his only performance on Byzantium. Guest musicians include tenor saxophonist Alan Skidmore (“Lady Friend”) and timpanist Frank Riccotti (“Why Or Maybe It’s Because”).

In late 1972, Ramsden left Byzantium over musical differences. Rubenstein took his place in the band and invited a new partner, guitarist Mick Barakan (b. 1974), as a fifth member. The pair had recently cut demos of Barakan’s “Morning Love,” Rubenstein’s “This Time I Won’t Let You Go,” and Jankel’s “Thank God.” Byzantium’s new lineup hit the road with Status Quo.

Byzantium’s second album, Seasons Changing, appeared in May 1973 on A&M (UK only). Side one contains two contributions from Barakan: the bass-scaling “October Andy” and the samba-tinged “My Season’s Changing With the Sun.” Jankel wrote the lurching “Show Me the Way” and the piano-thumping “I’ll Always Be Your Friend,” a music hall number with hints of Stackridge and Jackson Heights. Lamble contributed “What a Coincidence,” a galloping Wishbone-like rocker that starts the album with piercing lead sustain.

Side two consists of Rubenstein’s suite “Something You Said – A Trilogy,” comprised of three parts: “Something You Said,” “I Can See You,” and “Morning.” Across 20 minutes, the piece evolves from a spacious Man-like jam to a lucid Floydian ballad, sprinkled at times with oily Leslied licks; snare drums; and languid, airy harmonies.

Original copies of Seasons Changing were pressed at the Pye plant on vinyl that, when held to the light, appears plum red. A&M paired “What a Coincidence” and “My Season’s Changing With the Sun” onto a single.

In late 1973, Byzantium parted with Gaff, A&M, and Jankel, whose interests had drifted from the band’s West Coast harmony rock toward the funkier sounds brimming from the US urban scene. 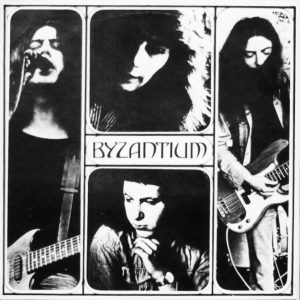 In March 1974, the lineup of Rubenstein, Barakan, Lamble, and Corduner self-released Live and Studio, a collection of nine new Byzantium originals captured live and demoed in the studio. They pressed 100 copies of the album as a “calling card on the industry.” The packaging consists of a simple b&w photo grid with Art Nouveau lettering.

Live and Studio contains two songs by Rubenstein (“Oh Darling,” “Surely Peace Will Come to Those Who Try”) and three apiece by Lamble (“Flashing Silver Hope,” “If You Wanna Be My Girl,” “Move With My Time”) and Barakan (“Cowboy Song,” “Feel It,” “I’ll Just Take My Time”). The material has an upbeat jangly vibe akin to Starry Eyed and Laughing.

Byzantium took to the live circuit with Sylvester as their soundman. They played throughout England and Western Europe with a state-of-the-art Midas PA. Between the spring of 1974 and the summer of 1975, they added newer material to their set, including Rubenstein’s “Halfway There” and numerous Lamble numbers (“Gypsy Man,” “High Time,” “Small World,” “Flashing Silver Hope”). The band got a lengthy write-up in the UK music monthly Let It Rock by champion Gary Herman.

In July 1975, Atlantic Records commissioned time for Byzantium at Tangerine Studios, where the band cut demos of Lamble’s “Alright Now,” Rubenstein’s “It Could Be Better,” and the Rubenstein/Barakan co-write “You Made Me Stand Up Straighter.” On August 30, Byzantium played a free concert at Hyde Park with Supercharge, Third World, and Wigwam.

Atlantic passed on signing Byzantium, which disbanded after one final gig late that summer at London’s Roundhouse.

Jankel served as an unofficial fifth member of Jonathan Kelly’s Outside for their 1973 album …Waiting On You. After appearing on the second, self-titled album by Headstone, he became the keyboardist, songwriter, and musical director for Ian Dury, starting with the singer’s 1977 debut solo album New Boots and Panties!!! Jankel continued in that capacity for the 1978/79 Blockheads releases “What a Waste,” “Hit Me With Your Rhythm Stick,” and Do It Yourself.

In 1980, Jankel went solo with a self-titled album on A&M, followed by the 1981–85 releases Chasanova (aka Questionnaire), Chazablanca, and Looking at You.

Lamble surfaced in the backing band of Al Stewart, starting with the singer’s 1978 album Time Passages. By the time of Stewart’s 1980 release 24 Carrots, they were billed as Shot In the Dark. In 1981, the LA-based group released its own album on RSO. During that decade, Lamble continued backing Stewart and also recorded with American country-pop singer Juice Newton.

Corduner surfaced in the Liverpudlian act Nasty Pop for their 1977 second album Mistaken ID. He then teamed with musician Peter Marsh (Easy Street, Blanket of Secrecy) in Twist, which issued a 1979 album on Polydor.

Barakan played on some long-vaulted recordings by Mick Ronson, released on the guitarist’s posthumous comp Just Like This. He also played on 1979–81 albums by Randy Vanwarmer, Andy Pratt, and Ian Hunter. Under the pseudonym Shane Fontayne, Barakan played on ’80s albums by Brian Briggs, Lisa Blade, Phoebe Snow, and Lone Justice.

Rubenstein served as a touring manager for Curved Air, then took staff positions at EG Music and CBS, where he worked in the A&R department. He was later appointed Head of Legal and Business Affairs at Virgin Music. After they sold to EMI, he established a private law practice.