Bulldog Breed was an English psych-rock band that released the single “Portcullis Gate” and the album Made in England on Deram Nova in 1969.

Bulldog Breed had its roots in Neon Pearl, a psychedelic band that featured bassist Bernie Jinks and guitarist Rod Harrison. After a stint in Germany, they regrouped in London as Please. Their third member, drummer Pete Dunton, left soon after for a stint in The Flies. On his return to Please, he brought Flies vocalist Robin Hunt. The Please lineup of Jinks, Harrison, Hunt, and Dunton recorded an album’s worth of material that remained vaulted for three decades.

In early 1969, Dunton traded places with Gun drummer Louie Farrell, whose arrival in Please prompted a name-change to Bulldog Breed, a British literary term for veterans of the two World Wars. They signed to Decca’s psych-friendly Deram imprint and entered West Hampstead Studios with the infamous John Christian-Dee. 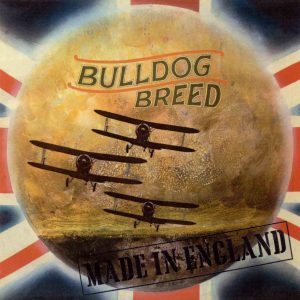 Bulldog Breed released Made in England in late 1969 on Deram. The album features 14 group-written originals, including “Reborn,” “Revenge,” “Eileen’s Haberdashery Store,” “Folder Men,” “When the Sun Stands Still,” and “Sheba’s Broomstick Ride.” All songs are in the two-minute range, apart from “Paper Man,” “Friday Hill,” and “Austin Osmanspare.”

Musically, Bulldog Breed bridged the tuneful freakbeat of the 1966–68 era with the thunderous sounds that were just now coming into vogue on the U.K. music scene.

Christian-Dee produced the album after his stint in the schlager pop duo Adam & Eve. His earlier credits include compositions for The Pretty Things (“Don’t Bring Me Down”) and The Fairies (“Get Yourself Home”). Made In England was engineered by Peter Wade, who also worked on 1969 albums by Andwella’s Dream, Aynsley Dunbar, Bee Gees (Odessa), and Jan & Lorraine.

The artwork for Made In England is credited to the Decca Publicity Art Department. It shows three WWI-era biplanes flying forth from an impressionistic backdrop, as seen in a cone in front of the Union Jack flag. The back cover features liner notes by Daily Express columnist David Wigg, who wrote that Bulldog Breed “look upon their guitars as their best friend.”

Two further songs from the Made In England sessions, “Halo In My Hair” and “Portcullis Gate,” were paired on a UK Deram 7″.

Made in England first appeared in Germany (PD 12017) and France (SDN 5) as the third release in Deram’s Nova Series. The original issue appeared just after the debut albums by Ashkan, Clark-Hutchinson, and Galliard (Strange Pleasure). 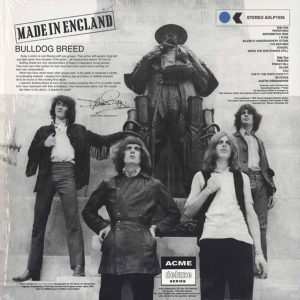 Immediately after sessions wrapped, Harrison cleared out for 17-year-old guitarist and singer Keith Cross. As the album went to press, the new lineup had a photoshoot outside the Embankment’s War Memorials in Central London. Cross appears on the lower right of the b&w group photo on the back of Made In England, despite not playing a note on the album.

In the UK, Made in England appeared in January 1970, several months after the band’s breakup.

The album track “I Flew” appears on Underground Communication, a 1970 German Decca comp with tracks by The End, East of Eden, Genesis (“In the Beginning“), and Touch.

Bulldog Breed scattered within weeks of the album’s release. Jinks re-teamed with Dunton and another Neon Pearl alumni, guitarist Nick Spenser, in a third iteration of Please. They recorded an album’s worth of material but failed once again to land a contract.

In December 1969, Jinks and Dunton grouped with Cross in a new trio, Morning. After learning the name was claimed, they renamed their band T2 and released the hard-rock album It’ll All Work Out in Boomland on Decca in 1970. Following their breakup, Cross teamed with guitarist/singer Peter Ross for the 1972 album Bored Civilians.

Also in 1972, Harrison resurfaced in Asgærd, a folk-psych band formed with two ex-members of hard-rockers Stonehouse. Their album, In the Realm of Asgærd, appeared on the Moodie‘s Threshold label.

Made in England was first reissued on CD in 1993 by German archivists World Wide Records, which also excavated titles by T2, High Tide, Luv Machine, Saturnalia, and Bachdenkel. In 2007, UK archivists Acme reissued the album with both sides of the “Halo” single added as bonus tracks.