Budgie was a Welsh hard-rock band that released 10 albums between 1971 and 1982 on MCA, A&M, and RCA Victor. The one constant member throughout that time was bassist/vocalist Burke Shelley, who resurrected the nameplate in the 21st century.

Budgie formed in 1967 Cardiff as a power trio comprised of bassist/singer Burke Shelley, guitarist Tony Bourge, and drummer Ray Phillips. They initially gigged as Hills Contemporary Grass before a prospective name-change to Six Ton Budgie. By the time of their 1968 demo sessions, they settled on the name Budgie, the nickname of the yellow/green budgerigar parakeet. After two years plying the UK club circuit, they secured a deal with MCA Records and entered Monmouth’s Rockfield Studios, the recording place for all but two of their ensuing studio albums. 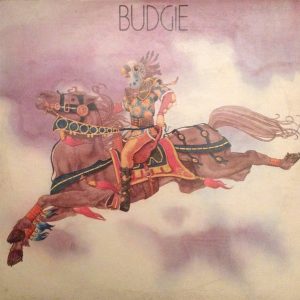 In June 1971, Budgie issued their self-titled debut album on Kapp (North America) and MCA (everywhere else). It features eight group-written numbers, including the medium-length epics “Rape of the Locks,” “The Author,” and “Homicidal Suicidal,” and the nearly nine-minute “Nude Disintegrating Parachutist Woman.” A concurrent non-album track, “Crash Course in Brain Surgery,” was issued as a single with an abbreviated “Nude” on the flip.

Budgie and its followup were produced by Rodger Bain, who also produced Battle Hymn by Wild Turkey and the first three albums by Black Sabbath. The cover illustration, which depicts an airbound chicken-headed horseman, is credited to one David Sparling. 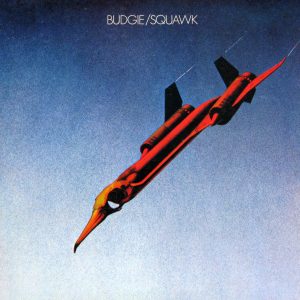 Budgie’s second album, Squawk, appeared in September 1972. It features nine group originals, including the lengthy “Young Is a World,” the short “Make Me Happy,” and the five/six-minute-range “Hot as a Docker’s Armpit,” “Stranded,” and “Rocking Man.” The opening track, “Whiskey River,” was issued as a single.

The cover art to this album and its followup were illustrated by artist Roger Dean (Yes, Uriah Heep, Osibisa, Midnight Sun, Earth & Fire, Greenslade, Asia). The Squawk imagery, with its sleek cardinal-headed aircraft and ordinary typeface, is a departure from the fantasy-scapes that characterize most of Dean’s work. 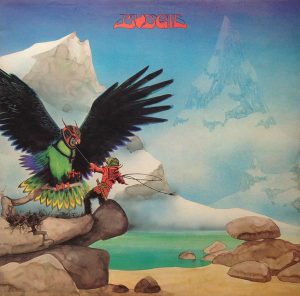 The third Budgie album, Never Turn Your Back on a Friend, was recorded February–March 1973 and released that June. Six of the seven numbers are group originals, including “In the Grip of a Tyrefitter’s Hand,” “Breadfan,” “You’re the Biggest Thing Since Powdered Milk,” and the 10-minute epic “Parents.” This was their first self-produced effort and their first to include a cover, “Baby, Please Don’t Go,” written in the 1930s by Delta bluesman Big Joe Williams and popularized in the 1960s by Irish R&B/beatsters Them. Soon after this album’s release, Phillips left the band.

Original pressings of Never Turn Your Back on a Friend come in a gatefold cover that depicts winged/masked hybrid creatures in a scenic landscape, an image more in keeping with Dean’s contemporaneous works (Demons and Wizards, Tales from Topographic Oceans, Relayer). This marked the first appearance of Dean’s trademark Budgie logo, used by the band on their next two albums and later resurrected for their early ’80s output. 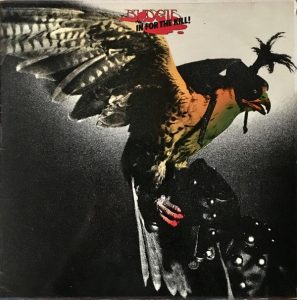 Budgie’s fourth album, In for the Kill, was released in May 1974. It contains three Bourge/Shelley originals per side, including the six-minute side openers “In for the Kill” and “Hammer and Tongs” and the nine/ten-minute side closers “Zoom Club” and “Living on Your Own.” Also included is the 1971 rarity “Crash Course in Brain Surgery,” later covered by Metallica. For this release, the drum seat was deputized by one Pete Boot.

Warpig
Warpig were a Canadian hard-rock band that released a self-titled album on Fonthill in 1970. Memb...
Uriah Heep
Uriah Heep are an English hard-rock band from London that released two albums on Vertigo in 1970/7...
Pattie Brooks
Pattie Brooks is an American soul singer from Fort Riley, Kans. Discography: Love Shook (19...
Shandi Sinnamon
Shandi Sinnamon (born 1954) is an American singer/songwriter from Miami who released a self-titled...
Bruce Ditmas
Bruce Ditmas (born Dec. 12, 1946) is an American drummer, percussionist, and keyboardist from Atla...