Brainchild was an English jazz-rock/soul band that released the album Healing of the Lunatic Owl on A&M in 1970.

Brainchild congregated in Somerset at the close of the 1960s. They were part of a select clutch of U.K. acts (Galliard, If, The Greatest Show On Earth) with an integrated brass/woodwind section, mirroring the format recently established by stateside acts Chicago, Blood, Sweat and Tears, and The Sons of Champlin.

Healing of the Lunatic Owl 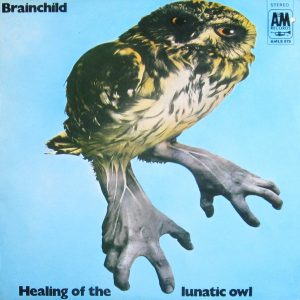 Brainchild released their singular album, Healing of the Lunatic Owl, on A&M in 1970. It features four songs per side: three apiece from saxist Brian Wilshaw (“To B,” “Hide from the Dawn,” the title-track) and bassist/singer Harvey Coles (“She’s Learning,” “A Time a Place,” “Sadness of a Moment”); two credited to singer/guitarist Bill Edwards (“Autobiography,” “Two Bad Days”).

The Glass House
The Glass House was an American soul group from Detroit. Members: Scherrie Payne (vocals), Larr...
The Greatest Show on Earth
The Greatest Show on Earth was an English brass-rock band that released the albums Horizons and Th...
Taxxi
Taxxi were an English modern-rock trio that released three albums on Fantasy between 1980 and 1983...
Univeria Zekt
Univeria Zekt were an alter ego of French super-band Magma, supplanting the popular nameplate for ...
Andy Fraser
Andy Fraser (July 3, 1952 — March 16, 2015) was an English bassist and songwriter who rose to prom...