Boxer was an English hard-rock supergroup that released two albums on Virgin and a third-recorded title on Epic between 1975 and 1979. The band marked the third pairing between vocalist Mike Patto and guitarist Ollie Halsall, who had previously played together in the bands Timebox and Patto.

Patto got his start a decade beforehand as vocalist for R&B combo The Bo Street Runners. From there, he teamed with Halsall in Timebox, which released a clutch of singles and ultimately morphed into the band Patto at the dawn of the 1970s. After three albums, the two briefly parted: Patto to Spooky Tooth, where he sang on the band’s 1974 release The Mirror; and Halsall to Jon Hiseman’s Tempest, where he briefly rubbed shoulders with fellow axeman Allan Holdsworth and played on the album Living in Fear.

Just as Boxer was getting underway, Halsall and Newman played on the album Fatsticks by ex-Third World War frontman Terry Stamp. 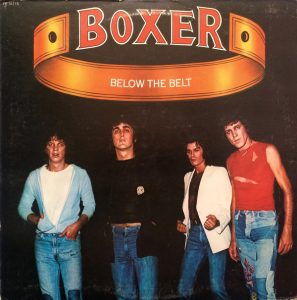 Signed to Virgin Records as part of the budding label’s attempt to broaden its roster, Boxer knocked out Below the Belt in late 1975. Exhibiting the member’s seasoned chops, the foursome channel their expansive tendencies into a focused attack on this first offering.

A slick, steady kick-drum drives the reverb-laden organ riff of “All the Time in the World,” which maintains a rock-solid chordal bed throughout the tension and release of the rhythmic track. Minutes later, soaring Hammond keys power a sonic hurricane around the lurching precision of “Hip Kiss” — a number enacted with distorted vocals and haunted harmony whispers.

Accented-third beats punctuate the angular homophonic verses of “Loony Ali,” which cuts to voice-stretching back chords and distortion-sprayed rhythmic windmills — a pattern that repeats several times in under four restless minutes.

Various cuts show the band’s dynamically adeptness, such as the penultimate “Gonna Work Out Fine,” where muted ivory runs underscore Patto’s vocals before breaking to an explosive chorus marked by frenzied piano/Clavinet trade-offs.

The cowbell-coasting “Shooting Star” demonstrates the rhythmic synchronicity shared by Patto and Halsall — a rare quality in rock. Here, the vocalist matches every cadence of the guitarist, from the rollicking verses to the taut, fussy bridges.

Hoping to give a well-deserved song more exposure, Halsall submits his Tempest contribution “Waiting for a Miracle” for Patto to sing. Suitably, this woke-yet-slow-tempoed number emphasizes vocals over guitar.

In 1976, Boxer recorded a followup that wound up frustratingly shelved, only to appear three years later with the title Bloodletting. Augmenting the foursome for these sessions were the talents of vocalist Boz Burrell (King Crimson), guitarist Bobby Tench (Gass, Hummingbird, Streetwalkers, Jeff Beck Group), and keyboardists Chris Stainton and Tim Hinkley. 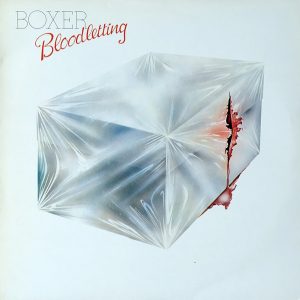 The first side centers around “Rich Man’s Daughter,” where chords dart from the highs of D to the lows of F amidst alternately open/closed cadences. As minutes pass, the track’s gruff tonal feel is cooled with a simmering Moog solo. Shortly thereafter, further dynamics are on display with the trotting verses and crescendo-laden chorus of “The Loner.”

Side two is book-ended with the exasperated sentiments of “Why Pick On Me” and a live rendition of Leonard Cohen’s “Teachers.” The former is put to action with woundup riffs and speedy saloon-piano fills, while the latter alternates sumptuous acoustic-plucking with explosive, drum-fueled amplification. Between the two, “Love Has Got Me” trades blissful maj7 verses with a tense, frustrated chorus. 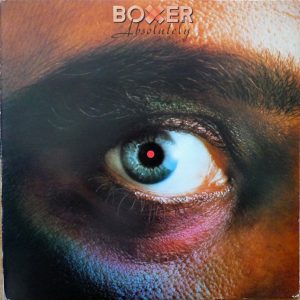 Not one to rest in his predecessor’s shadow, Fisher exudes flash, fire, and filigree across the motorboat pace of “Fool In Love.” Soon thereafter, the two-chord, 2/4 wallop that starts “Red Light Flyer” gets torn asunder by an arched, reaching chorus and high-altitude Strat solo.

Rounding out side one, a descending, ominous organ line greets Patto for the minor-chord melodrama of “No Reply,” which briefly soars at full speed before scaling back to a slow, progressively layered heaviness. Capping the album with utmost intensity, the woundup syncopated verses of “Hand On Your Heart” give way to a flowing chordal descent that throws up every instrument in the mix.

Though this lineup was contracted for several more albums, Patto fell ill soon after the release of Absolutely. Sadly, the vocalist died from leukemia in March 1979 at age 36. Predeceasing him was original Boxer-bassist Ellis, who died the year beforehand whilst touring Germany with Iron Butterfly.

Judy Bailey
Judy Bailey (born Oct. 3, 1935) is a New Zealand-born pianist, composer, and arranger who was acti...
William Bell
William Bell (born July 16, 1939) is an American soul singer from Memphis. Discography: Th...
Catalyst
Catalyst was an American jazz-funk band that released four albums between 1972 and 1975. Their fir...
Godot
Godot were an English coldwave/synthpop combo from Liverpool that self-released a four-song EP in...
Automatic Fine Tuning
Automatic Fine Tuning were an English instrumental hard-rock band from Reading, Berkshire, that re...