Blossom Toes were an English psych-rock/pop band from London that released the album We Are Ever So Clean on Marmalade in 1967, followed by If Only for a Moment in 1969. During the band’s three-year existence, their music evolved from the toy-town style (The Move, The Idle Race) to a gruffer approach in line with then-emerging hard-rock trends.

Guitarist Jim Cregan split from the band soon after the second release. He resurfaced in the instrumental trio Stud and later joined Rod Stewart‘s backing band. The remaining Blossom Toes morphed into B.B. Blunder for the 1971 album Workers’ Playtime with vocalist Julie Driscoll. They also partook in the big-band project Centipede, led by her husband Keith Tippett.

Guitarist/vocalist Brain Godding would later play with everyone from Kevin Coyne and Gary Glitter to Mike Westbrook and Annette Peacock. He briefly joined French chamber-rockers Magma for their 1974 Köhntarkösz album and tour. In 1977, he headed the instrumental one-off Mirage.

The Blossom Toes started as The Ingoes, a London beat group formed in 1964 by guitarist Brain Godding and bassist Brian Belshaw. They were managed by impresario Giorgio Gomelsky, owner of the famed Crawdaddy Club where The Rolling Stones and the Yardbirds, both earlier clients, launched their careers.

The Ingoes focused much of their energy on mainland Europe, gigging in Paris, Spain, and Morocco with a setlist comprised of R&B covers and select originals, mostly co-written by Godding and bandmate Eddie Lynch (aka Ed Furst, who cut a 1968 freakbeat single as Rifkin). In 1965, The Ingoes released an Italian-language cover of the Beatles “Help” (“Se Non Mi Aiuti Tu“) for a 7” on Italy’s Ricordi International. During 1966, they issued a maxi-single for the French market on the Riviera label and contributed to the soundtrack of Les Collectionneuse, in which Belshaw appears as an extra.

By 1967, the lineup of Godding, Belshaw, guitarist Jim Cregan, and drummer Kevin Westlake morphed into Blossom Toes and signed to Gomelsky’s Marmalade Records. On July 29, they played the International Love-In Festival at London’s Alexandra Palace along with label-mates Brian Auger’s Trinity (with Julie Driscoll) and some of the era’s leading psych acts (Pink Floyd, Tomorrow, The Creation, Crazy World of Arthur Brown), all echoed in the Toes’ new setlist, which included a Captain Beefheart cover (“Electricity”) among the originals. 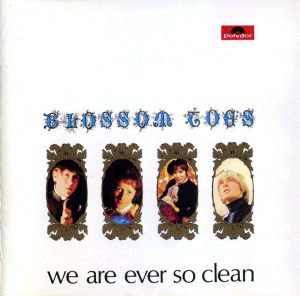 The Blossom Toes released their debut album, We Are Ever So Clean, on Marmalade in October 1967. It features 15 originals, seven by Godding, including “I’ll Be Late for Tea,”, “You,” “Love Is,” “Mister Watchmaker,” and “I Will Bring You This and That.” Cregan contributed “What’s It For,” “When the Alarm Clock Rings,” and “The Intrepid Balloonist’s Handbook, Volume One.” The remaining tracks are mostly co-writes, including the Godding/Gomelsky opener “Look at Me I’m You” and the Cregan/Westlake number “Mrs. Murphy’s Budgerigar.” Gomelsky produced the album with engineer John Timperley and orchestral arranger David Whitaker. Godding’s “What on Earth” was issued as a single. 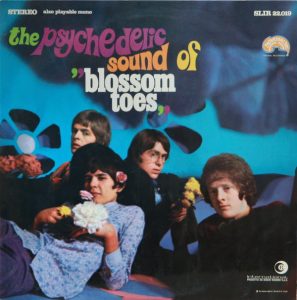 We Are Ever So Clean sports a white cover with each member pictured in Regency attire and Edwardian frames. It’s credited to the design firm Paragon Publicity, which also did visuals for The Who (“Happy Jack,” German Polydor 7″), Cream (Fresh Cream), and Trinity (Open). The four members are listed as “Big Brian Known as Scarlet” (Belshaw), “Little Brian Known as Wellington” (Godding), “Jim Known as Bartholomew” (Cregan), and “Kevin Known as Plod” (Westlake). In Italy, the album was issued on Ricordi International as The Psychedelic Sound of Blossom Toes with an alternate cover that shows the band reclined in a blue setting under psych-period typeface.

Musically, We Are Ever So Clean weds the antique toyland adventures of The Move and The Idle Race with the more schizophrenic sounds of Syd Barrett‘s Pink Floyd. “Look at Me I’m You” fades in with spiraling marimbas on a backward piano sustain, then cuts to multiple passages: a cymbal-sprayed, discorded verse riff; a Gregorian vocal interlude; a brass-smeared bridge afloat on wavy bass. “I’ll Be Late for Tea” begins on a blaring singalong chorus in G. As the song unfolds, harmonized verses, trebly bass lines, trumpeting martial bridges, and vocal-layer interludes trade off to a kitchen-sink outro.

On “You,” fussy chords fight a burlesque rhythm, resolved in a glockenspiel-laden chorus with phased vocals and backward cymbal mist. “What’s It For” has a deep-diving cello/trumpet riff, echoey piano, and a chamber swelling chorus. The Left Banke-like “Love Is” is a minor-key melange of strings and flute, giving way to a rising chorus and recoiling cello fadeout. Later, fanfare-like bass/staccato-guitar counterpoint heralds “When the Alarm Clock Rings,” where windy harmonies fuel the driving, trumpet-sprinkled chorus in A.

One month after the album’s release, Westlake cleared way for drummer/percussionist John “Poli” Palmer, once of Brumbeat mods The Hellions (with future Traffic members Dave Mason and Jim Capaldi). 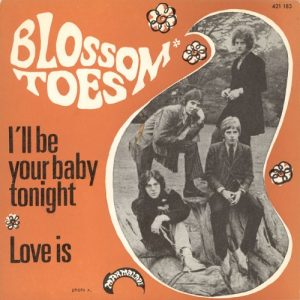 In March 1968, Blossom Toes issued a cover of Bob Dylan’s “I’ll Be Your Baby Tonight.”  French copies sport an orange sleeve with squeezed bubble-lettering and a teardrop-enclosed band photo. Also that month, they partook in a two-night benefit ball (along with Family, The Pretty Things, The Attack, Fairport Convention, and Pete Brown’s Poetry Band) at the Middle Earth in Convent Garden. In May, they played a two-day Whittlesley barn barbecue with Donovan, The Move, Fleetwood Mac, and John Mayall’s Bluesbreakers. 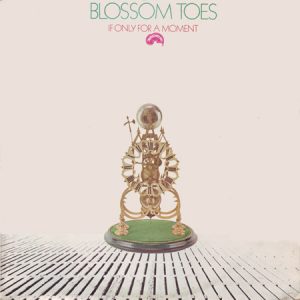 The Blossom Toes’ second album, If Only for a Moment, appeared in July 1969 on Marmalade. It has seven originals: four by Godding (“Peace Loving Man,” “Kiss of Confusion,” “Love Bomb,” “Billy Boo the Gunman”) and three by Cregan (“Listen to the Silence,” “Indian Summer,” “Wait a Minute”). The one outside composition, Richie Haven’s “Just Above My Hobby Horse’s Head,” features Shawn Phillips on 12-string and sitar. Gomelsky produced the album with assistance from ex-Action vocalist Reggie King. “Peace Loving Man” was issued as a single in a pink candy-stripe sleeve. 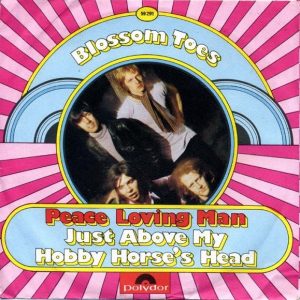 The Toes supported If Only for a Moment with several high-profile shows that summer, including a multi-act bill at the Round House in Camden Town (with Steamhammer, Quintessence, and High Tide) and a set at the 9th Annual Jazz, Pop, Ballads & Blues Festival at the Plumpton Racecourse. They played the first night of the three-day event (Aug. 8-10, 1969) along with Pink Floyd, Soft Machine, East of Eden, and the Keith Tippett Jazz Group. On October 26, the third night of the Festival Actuel in Amougies, Belgium (originally set for Paris), the Toes appeared with Caravan and The Nice. Frank Zappa MC’d the event and joined each act on stage (including the Toes). That same month, they prepared a new a-side, “New Day,” but it wasn’t released.

Blossom Toes closed out 1969 playing up and down England opposite Yes, Renaissance, Aardvark, Grail, Gracious, and Rare Bird. After a two-week break, Godding and Belshaw decided to end the band. Reeves showed up next in UK/German hard-rockers Megaton.

Cregan teamed with the Taste rhythm section in the power-combo Stud, which released two 1971/72 albums of improvisational blues/jazz rock and gigged heavily in Germany. He then did stints in Family (It’s Only a Movie, 1973), Steve Harley and Cockney Rebel (1975–76), and spent the next two decades in Rod Stewart‘s backing band. 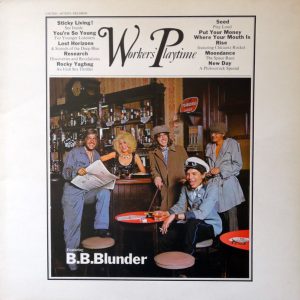 In 1970, Godding and Belshaw reteamed with Westlake and formed B.B. Blunder with Julie Driscoll. Their one album, Workers’ Playtime, appeared on United Artists in 1971. It features five tracks by Godding, one by Westlake, and four group-written originals. Vocal duties shift between members; Driscoll is present on half the tracks. Westlake plays guitar on three songs. Mick Taylor plays bottleneck on the closing “New Day,” engineered by future Yes/ELP studio-hand Eddie Offord.

Also in 1971, Godding and Belshaw played on Driscoll’s debut solo album 1969 along with her husband, pianist Keith Tippett, and members of Nucleus and Soft Machine. Concurrently, all parties partook in Tippett’s experimental big-band project Centipede, which released the double-album Septober Energy that year on RCA/Neon.

Godding cut one album with Solid Gold Cadillac and joined French Zeuhl figureheads Magma for their 1974 release Köhntarkösz. Mid-decade, he played on two albums by the Mike Westbrook Orchestra and Driscoll’s 1975 album Sunset Glow, released under her married name Julie Tippetts. In 1977, he formed the jazz-rock combo Mirage, which cut the album Now You See It… for the Norwegian label Compendium Records. He subsequently played on albums by Annette Peacock, Kevin Coyne, and further Westbrook titles. His 1988 Reckless Records release Slaughter on Shaftesbury Avenue, recorded with makeshift studio groups (GLS, Other Routes, Full Monte), is often likened to the contemporary works of Allan Holdsworth.

The two Blossom Toes albums were first reissued on CD in 1992 on Polydor (Japan). They’ve since been reissued numerous times, including recurrent pressings (with bonus tracks) by UK archivists Sunbeam Records. In 2009, Sunbeam issued the rarities discs Love Bomb – Live 1967-69 and What on Earth: Rarities 1967-69.