Blood, Sweat & Tears were an American brass-rock/soul band from N.Y.C., formed in 1967 by Blues Project alumni Al Kooper and Steve Katz. After their 1968 Columbia debut Child Is Father to the Man, Kooper and trumpeter Randy Brecker departed for prolific solo and collaborative careers. In 1969, a revised lineup with vocalist David Clayton-Thomas issued a self-titled album that spawned three #2 singles: “You’ve Made Me So Very Happy,” “And When I Die,” and “Spinning Wheel.” During the 1970s, the band issued nine further studio albums amid further changes in personnel.

Blood, Sweat & Tears was formed in 1967 New York City by keyboardist Al Kooper and guitarist Steve Katz, who both hailed from The Blues Project. Kooper had also played on albums by Bob Dylan (Highway 61 Revisited, Blonde on Blonde), Tom Rush (Take a Little Walk With Me), and Peter, Paul and Mary (Album). They first recruited drummer Bobby Colomby and bassist Jim Fielder. After making their debut performance as a quartet, they hired pianist Fred Lipsius, who also played saxophone.

Fielder was a backing player for Tim Buckley, appearing on the singer’s first two albums. In 1967, he joined The Mothers of Invention for the second album, Absolutely Free. That same year, he briefly deputized the bass slot in Buffalo Springfield for a detained Bruce Palmer.

Inspired by the Maynard Ferguson Orchestra and the brassy pop sound of The Buckinghams, Kooper envisioned a rock band with an integrated brass section. To that end, he enlisted trombonist Dick Halligan and trumpeters Randy Brecker and Jerry Weiss. All were relative newcomers except Brecker, who had played with Clark Terry’s Big Bad Band and the Thad Jones/Mel Lewis Orchestra.

The eight-piece lineup played its first show at the Cafe Au Go Go in November 1967. That same month, they began work on their first album with producer John Simon. 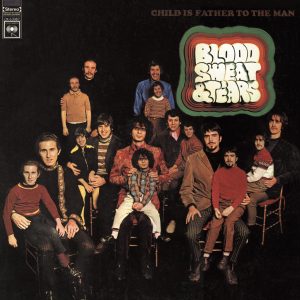 Blood, Sweat & Tears released their first album, Child Is Father to the Man, in February 1968 on Columbia. It features 13 numbers, including six Kooper originals: “Overture,” “I Love You More Than You’ll Ever Know,” “My Days Are Numbered,” “Somethin’ Goin’ On” “House in the Country,” and “The Modern Adventures of Plato, Diogenes and Freud.” He sings lead on all but two tracks and collaborated with songwriter Irwin Levine on the sunny “I Can’t Quit Her,” which became a minor hit. Katz contributed the track “Meagan’s Gypsy Eyes.” The albums also features covers of songs by Harry Nilsson (“Without Her”), Randy Newman (“Just One Smile”), Tim Buckley (“Morning Glory”), and Goffin/King (“So Much Love”).

Two months after the album’s release, Kooper left the band over disagreements with Katz and Colomby. They wanted to hire a belter vocalist as their frontman and relegate Kooper to the roles of keyboardist and arranger. That May, Kooper cut Super Session with Mike Bloomfield and Stephen Stills, followed in 1969 by Kooper Session with Shuggie Otis. He then embarked on a prolific career in production amid sporadic solo activity.

Brecker cut a 1969 solo album, Score, with pianist Hal Galper, drummer Bernard Purdie, guitarist Larry Coryell, and his younger brother, saxophonist Michael Brecker. The brothers then formed the brass-rock band Dreams, which issued two 1970/71 albums on CBS/Columbia. They subsequently recorded as The Brecker Brothers and made numerous guest appearances on jazz and pop albums over the next two decades.

Weiss played on the 1969 album Spectrum by jazz drummer Les DeMerle. He then co-founded the brass-rock big band Ambergris, playing bass and piano on their 1970 singular album.

Robert Plant
Robert Plant (born Aug. 20, 1948) is an English vocalist and songwriter from West Bromwich who sho...
Hackamore Brick
Hackamore Brick was an American band from Brooklyn that released the album One Kiss Leads to Another...
Monk Montgomery
Monk Montgomery — aka William Howard Montgomery (Oct. 10, 1921 — May 20, 1982) — was an American j...
Peter Tessier
Peter Tessier is a Canadian songwriter, arranger, producer, and recording engineer who released th...
Syl Johnson
Syl Johnson — aka Sylvester Thompson (born July 1, 1936) — is an American soul singer from Holly S...