Blonde on Blonde was a Welsh folk-rock/psych band that released the album Contrasts on Pye in 1969, followed by the 1970/71 albums Rebirth and Reflections on a Life on Ember Records. Singer/guitarist Ralph Denyer left after the first album to explore brassier territory with the RCA Victor one-off Aquila.

Blonde on Blonde had its toots in The Cellar Set, a blues-rock band formed in Newport, Wales, in 1967 by guitarist Gareth Johnson with bassist/organist Richard Hopkins and drummer Les Hicks. In 1968, they moved to London and hired singer/guitarist Ralph Denyer. They took their name from the 1966 album Blonde on Blonde by Bob Dylan. Their debut single, “All Day, All Night” (b/w “Country Life”), appeared in late 1968 on Pye Records. 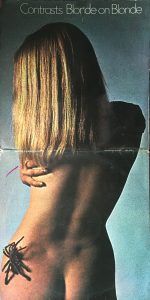 Blonde on Blonde released their debut album, Contrasts, in 1969 on Pye (UK, NZ) and Janus (US). It features nine originals: four by Denyer (“I Need My Friend,” “Conversationally Making the Grade,” “Don’t Be Too Long,” “Jeanette Isabella”), three by Johnson (“Spinning Wheel,” “Mother Earth,” “Island on an Island”), one Johnson/Hopkins co-write (“Regency”), and the group-written “Ride With Captain Max.” The album also contains covers of The Beatles (“Eleanor Rigby”) and the Incredible String Band (“No Sleep Blues”).

Contrasts was produced by Barry Murray, who wrote the track “Goodbye” and the pre-LP “Country Life.” He produced 1969/70 recordings by Trader Horne, Titus Groan, and Mungo Jerry. The album was engineered by Howard Barrow, a tech hand on Pye sides by The Kinks, Petula Clark, Donovan, and Labi Siffre, as well as 1969 albums by Man, Fleetwood Mac, Killing Floor, and the debut by Elton John.

Original copies of Contrasts are housed in a vertical gatefold sleeve with a backshot of a female nude with a tarantula on her hip. The inner-spread features a b&W posed shot of each member; Johnson dons a hat and cape.

“Ride With Captain Max” appears on the US comp Janus Sampler ’69 with cuts by Canned Heat, Mike Cooper, Johnny Winter, and the Flying Machine (UK group). That song also appears (with “Conversationally Making the Grade“) on the 1969 German Mode Serie comp Progressive Music with tracks by Man, Arcadium, Writing On the Wall, Woody Kern, and Velvett Fogg. 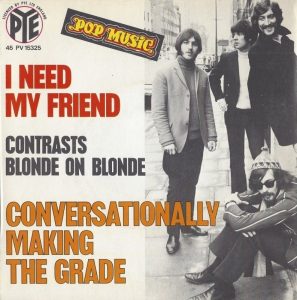 In France, Pye issued “I Need My Friend” (b/w “Conversationally Making the Grade”) as part of the label’s Fashion series (The Foundations, Episode Six, Status Quo, The Orange Machine). This release identifies the band as Contrasts Blonde on Blonde. 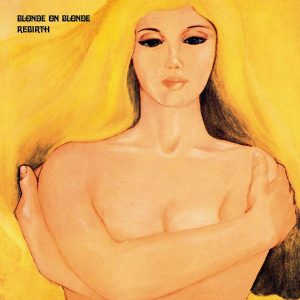 Blonde on Blonde’s second album, Rebirth, appeared in 1970 on Ember (UK, Canada) and Fontana (France). Thomas contributed “Broken Hours,” “November,” and the 12-minute “Colour Questions.” Johnson wrote “Heart Without a Home,” “”Circles,” and “You’ll Never Know Me“, which segues into the closing track “Release,” written by Hopkins (credited here as Richard John). “Time Is Passing” is a Thomas/Hicks co-write.

The opening track, “Castles In the Sky,” was issued as a single (b/w “Broken Hours”) on Ember (UK, Spain, Belgium) and French Fontana. It was written by the team of Paul Smith and Evelyn Shulman, sister of the Shulman brothers (Simon Dupree & the Big Sound, Gentle Giant). The pair also wrote many Big Sound sides. (“For Whom the Bell Tolls,” “Part of My Past,” “Like the Sun Like the Fire”). In Portugal, “Castles” appeared on an Ember maxi-single with “November,” “Time Is Passing,” and “Circles.” 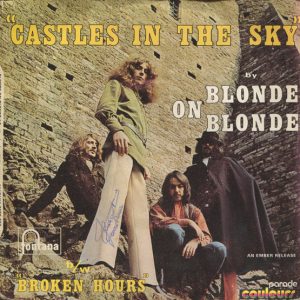 Rebirth sports no tech credits but the LP labels state “A Head Mole Production.” The inner-spread features liner notes by DJ Tommy Vance and journalist John Mendelsohn, a pre-deal Sparks player best known for his annotations on early ’70s releases by The Kinks. Original UK copies of Rebirth were pressed on burgundy vinyl.

The gatefold cover opens vertically (underside) to reveal the female blonde as the figurehead of an arch tunnel, where the band members emerge on a concrete path. Artist Ely Besalel designed the cover; he also notched visual credits on 1969–71 albums by Stone Circus, The Last Nikle, Nucleus (Canada), and The Fuzz. Photographer Edward St. Maur captured images for this and the subsequent Blonde on Blonde album.

“Castles In the Sky” appears on the 1970 Ember comp Future Star Explosion – New Faces of the 70’s with cuts by assorted labelmates (The Good Vibrations, Good Ship Lollipop).

Prior to their next release, Hopkins cleared out for guitarist/bassist Graham Davies. 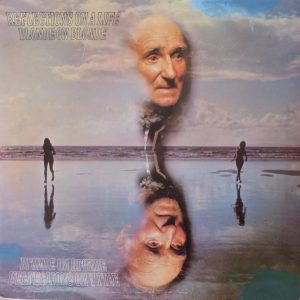 The third and final Blonde on Blonde album, Reflections on a Life, appeared in November 1971 on Ember. It features four songs apiece by Thomas (“Love Song,” “Bar Room Blues,” “Sad Song for an Easy Lady,” “The Bargain”) and Johnson (“Gene Machine,” “Happy Families,” “No. 2 Psychological Decontamination Unit,” “Chorale (Forever)”), plus two from Davies (“Ain’t It Sad Too,” “The Rut”) and the Thomas/Johnson co-write “I Don’t Care.”

Reflections on a Life was produced by Hicks — except for “I Don’t Care” and “No. 2 Psychological,” produced by Johnson — and coordinated by Pete Cornish in one of his only recording tech credits. Cornish later emerged as a director of music videos for Dire Straits, The Damned, Love and Money, and Matt Bianco.

On the cover, the face of an old man hovers over frolicking silhouettes on a beach. The back and inner-spread show photos of the band by a lake. St. Maur is credited with “visual interpretation.”

Blonde on Blonde recorded Reflections on a Life at Rockfield Studios, a residential facility in Monmouthshire, Wales, that was just coming into use after the solo success of ex-Love Sculpture guitarist Dave Edmunds, an early client. Rockfield was also the site of 1971 recordings by Spring, Man, Budgie, Michael Chapman, and Shape of the Rain.

Blonde on Blonde ran aground months after the third album’s release.

Davies released the 1976 solo album …..Then I Stood Back ‎on the Christian folk label Sharing Records.

Hicks resurfaced in 1978 in the pop-psych combo Crystal Suspension, which issued a self-titled album on the Dutch Doublejay label.

Heaven
Heaven was an English brass-rock band that played the 1969 and 1970 Isle of Wight festivals. In 19...
The Human Beast
The Human Beast were a Scottish hard-rock/psych trio from Edinburgh that released the album Volume...
James Brown
James Brown (May 3, 1933 — Dec. 25, 2006) was an American soul singer who was active as a performe...
Association P.C.
Association P.C. were a Dutch/German avant-garde jazz-rock ensemble that released five albums betw...
Led Zeppelin
Led Zeppelin was an English rock band, formed in 1968 and active till 1980. Guitarist Jimmy Page for...