Blodwyn Pig was an English blues-rock band that released the album Ahead Rings Out on Island Records in 1969, followed by Getting to This on Chrysalis in 1970. They were led by guitarist Mick Abrahams, who co-founded Jethro Tull but left after one album.

Pyle performed in Luton-area rock bands from the mid-’60s onward, starting with Victor Brox’s Blues Train (led by the future member of Aynsley Dunbar Retaliation). He then played bass in Jensen’s Moods along with Abrahams and drummer Clive Bunker. They eventually changed their name to McGregor’s Engine and hit the club circuit, where they interacted with the John Evan Smash, a Blackpool sextet that featured Anderson and bassist Glenn Cornick.

In late 1967, Abrahams joined the Smash, which disbanded shortly after signing a management deal with the Ellis Wright Agency (Chris Wright and Terry Ellis), which had a licensing deal with Island Records. Anderson, Abrahams, and Cornick formed a new band, Jethro Tull. Abraham’s roped in Bunker to round the initial lineup, which signed with Chrysalis and released its debut album, This Was, in October 1968.

Soon enough, a power struggle emerged in the Tull camp. Anderson wanted to play an eclectic mix of rock, folk, and blues, whereas Abrahams wished to infuse the blues with horns, ala Colosseum. Ellis favored Anderson as frontman, which meant that Abrahams would have a smaller share in the songwriting.

That December, Abrahams quit Tull and formed Blodwyn Pig with Pyle and newcomers Berg and Lancaster. The word “Blodwyn” is a feminine Welsh name that means “fair flower” or “white flower.” For their first album, they retained ties with Island Records.

Blodwyn Pig recorded their first album at Morgan Studios, Willesden, in April 1969. They debuted with the Abrahams-penned single “Dear Jill” (b/w “Sweet Caroline”), released that May. 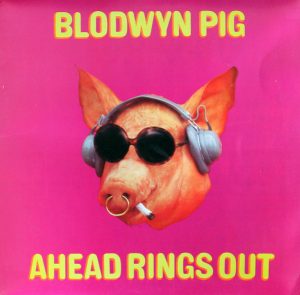 Ahead Rings Out appeared on Island on July 25, 1969. The album features the pre-released a-side and three additional Abrahams originals (“It’s Only Love,” “Sing Me a Song That I Know,” “The Change Song”), plus a co-write with Lancaster and Pyle on the closing “Ain’t Ya Coming’ Home, Babe?” Lancaster contributed two numbers, “The Modern Alchemist” and “Leave It With Me.” The centerpiece (“Up and Coming”) and the penultimate interlude (“Backwash”) are group-written numbers.

Producer Andy Johns was a month short of nineteen at the time of the sessions. This was his first production credit after he engineered 1968 titles by Traffic, The Deviants, Bonzo Dog Band, and the Jimi Hendrix Experience. In the months around Ahead Rings Out, he worked on 1969 albums by Humble Pie, Tramline, Circus, Mott the Hoople, Ten Years After, Jack Bruce (Songs for a Tailor), Renaissance (Renaissance), Free (Tons of Sobs), Spooky Tooth (Spooky Two), and Led Zeppelin (II).

Under producer Ellis, Johns engineered Stand Up, Jethro Tull’s second album, released the same day as Ahead Rings Out. The two albums went head-to-head on the UK charts, reaching #1 and #9, respectively.

Ahead Rings Out appeared in the US and Canada on A&M with an altered tracklist that replaces “Sing Me a Song That I Know,” “Up and Coming,” and “Leave It With Me” with three new cuts: “Walk on the Water” and “See My Way” (both Abrahams originals) and “Summer Day” (Abrahams/Pyle). 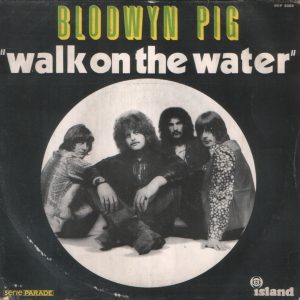 In the UK, “Walk on the Water” appeared as a non-album single in September 1969, backed with “Summer Day.”

Original UK and European copies of Ahead Rings Out are housed in a gatefold sleeve in a hot pink cover with yellow lettering. It sports the image of a pig with headphone, sunglasses, a cigarette and ring in its nose. The back shows the pig’s tail, apparently sticking out through the other end of a pink block. On the inner-spread, Blodwyn Pig are pictured surrounded by rows of candles in the dark.

Abrahams wrote the liner notes, where he states “if the album sleeve does not appeal to your taste, take a pair of scissors and cut in a straight line down the centre fold, open record insert fully and there you have two gay party hats.” 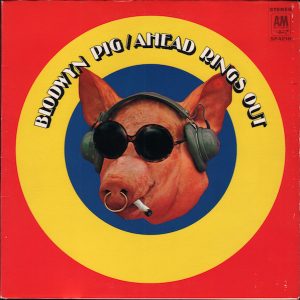 On North American copies, the pig appears inside a yellow-ringed blue bullseye, surrounded in red with circular typeface. The inner-spread contains track-by-track liner notes and close-up live shots of each member.

Blodwyn Pig supported Led Zeppelin on a spring 1969 UK tour. Between June and September, they opened for Soft Machine, King Crimson, Groundhogs, and Stone the Crows. They also played the first day (Saturday, August 30) of the 1969 Isle of Wight Festival alongside The Who, The Moody Blues, the Battered Ornaments, The Pretty Things, Fat Mattress, Gypsy, Blonde On Blonde, and the Edgar Broughton Band. That fall, they toured the states with dates supporting Spirit and Chicago.

“Dear Jill” appears on the 1969 Island comp British Blues Adventures Vol.1 with cuts by the aforementioned Johns-associated labelmates. “Sing Me a Song That I Know” and “Up and Coming” appear on Vol. 2. “Sing Me” also appears on the 1970 Dutch comp The Island Scene with cuts by Quintessence, Fairport Convention, and one attributed to Steve Winwood (actually the Jim Capaldi-penned Traffic number “Every Mother’s Son“), plus several aforementioned acts. 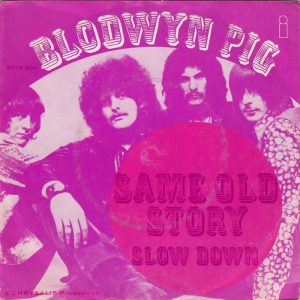 For their second album, Ellis moved Blodwyn Pig to Chrysalis, the recently established independent record label of the Ellis Wright Agency. Their third single is the Johns-produced Abrahams original “Same Old Story,” backed with a cover of the Larry Williams R&B standard “Slow Down.” Both songs remained exclusive to this single, released in January 1970.

Blodwyn Pig’s second album, Getting to This, appeared that April on Chrysalis/Island (UK, Europe, South Africa) and A&M (US, Japan, Oceania). All copies feature the earlier non-album Island a-side “See My Way,” thus placing the song on both A&M albums. 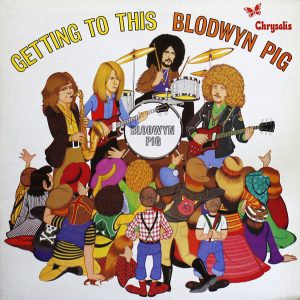 Getting to This features five additional Abrahams numbers: “Drive Me,” “Variations on Nainos,” “Toys,” “Send Your Son to Die,” and the interlude “Long Bomb Blues.” He collaborated on “The Squirreling Must Go On” with Pyle, who submitted “Worry.” Lancaster composed the album’s centerpiece, the eight-minute “San Francisco Sketches,” comprised of four sections. Berg got his own credit with the 89-second “To Rassman.”

Johns produced and engineered Getting to This at Olympic and Trident Studios. The sessions at Olympic took place around the same time as those for Led Zeppelin III, which Johns also engineered. Pianists Graham Waller guests on “Drive Me” and “Beach Scape.”

Most copies of Getting to This (Chrysalis and A&M) come in a gatefold sleeve. The cover sports a comic illustration of Blodwyn Pig performing before an audience of colorful youth seated Indian style, most of them hippies except for two skinheads (standing) and one Teddy boy (left).

The inner-spread shows a game board flanked with chips, pictures of nude women, outlines of pigs, and random images (Donald Duck, an Italian medallion). On the bottom right, a hand points to an empty maze beside a pig version of the 1898 painting His Master’s Voice, where a dog stares into a gramophone horn (later used as the logo by the namesake record label).

Blodwyn Pig headlined a Jan–March 1970 UK tour, supported on select dates by Black Sabbath, Trader Horne, Audience, and Writing on the Wall. They played a pair of April US East Coast dates with Van Morrison, John Mayall, and Blues Image before heading back to the UK for some May dates with Brinsley Schwarz, Pacific Drift, and May Blitz. Another round of US dates followed in July/August with opening slots for The Stooges, Procol Harum, and the Faces.

Despite being scheduled for Joint Meeting 1970 at Eisstadion, Düsseldorf, Blodwyn Pig didn’t appear at the May German festival.

In the late summer of 1970, Abrahams left Blodwyn Pig to work as a solo artist. They hired guitarist Peter Banks, who recently left Yes after two albums. A series of UK shows followed in September–October, including dates with Aardvark, Supertramp, and Wishbone Ash. Banks quit after two months to form Flash.

Blodwyn Pig changed its name to Lancaster’s Bombers and hired ex-Deviants guitarist Larry Wallis. After an early 1971 tour with Yes, they split with no new recordings. Wallis joined UFO, then the Pink Fairies.

Abrahams formed Wommet, which cut three songs (“Greyhound Bus,” “City of Gold,” “The Way You Look”) during a BBC One session on October 20, 1970. Also that year, he played on Gary Wright‘s Extraction, the debut solo album by the Spooky Tooth keyboardist.

In 1971, Abrahams released a self-titled solo album with backing by bassist Walt Monaghan (Freedom, Rust), keyboardist Bob Sargeant (Junco Partners), and drummer Ritchie Dharma, a fellow JE Smash alumni who inspired the This Was track “Dharma for One.” He retained this lineup with the addition of Lancaster for the Mick Abrahams Band, which released At Last on Chrysalis in 1972. Abrahams then exited the scene for nearly two decades.

Pyle played on Every Picture Tells a Story, the 1971 transatlantic breakthrough album by Rod Stewart. In 1972, Pyle and Berg played on the album Wun by Indo-Brit bluesman Gerry Lockran and joined Juicy Lucy for the blues-rock band’s fourth album Pieces. They joined Savoy Brown for the 1972/73 albums Lion’s Share and Jack the Toad. In 1975, the pair interacted with Lancaster on Pump Iron!, the debut solo album by Alvin Lee. Meanwhile, Berg played on one track (“Kew”) on the 1974 release Love Songs by Billy Nicholls.

Pyle reteamed with Lancaster on the jazz-rock adaptation of Peter and the Wolf (1975, RSO), recorded with members of Brand X with narration by Viv Stanshall. In 1977, he played on the album Down to Earth by the Sutherland Brothers & Quiver. He replaced John Dalton in The Kinks for their 1977/78 albums Sleepwalker and Misfits. His only solo album, Barrier Language, appeared in 1985 on the German Synton label. In 1990, he appeared on live and studio releases by Gary Moore and reunited with Mick Abrahams on the latter’s comeback disc All Said and Done.

Lancaster played flute on the 1970 Deram Nova release Feelin’ Free by Pacific Drift. After the Mick Abrahams Band, he played on the 1973 poetry album The “Not Forgotten” Association by ex-Piblokto! frontman Pete Brown. The Peter and the Wolf project brought him into orbit with Brand X. He played on their 1976 debut Unorthodox Behaviour and employed them on Marscape, his collaborative album with the band’s keyboardist Robin Lumley.

Abrahams reactivated Blodwyn Pig for a pair of mid-’90s discs with assorted players, including Bunker.