Black Merda was an American soul-funk/psych band from Detroit that released a self-titled album on Chess in 1970, followed by a second as Mer-Da on Janus in 1972. Along with Funkadelic and Purple Image, the band was pivotal in bridging R&B and psych-rock at the dawn of the 1970s.

The members of Black Merda first came together in Detroit in the early 1960s. Drummer Tyrone Hite was a native of the area; bassist VC Veasey and guitarist Anthony Hawkins hailed from Mississippi. The trio billed itself as the Soul Agents and provided R&B backing for up-and-coming soul acts, including Stevie Wonder, Edwin Starr, Wilson Pickett, The Spinners, The Artistics, and The Chi-Lites.

In 1967, the Soul Agents caught wind of the psych-rock boom and cut the single “Foxy Lady” on Gino Washington’s Atec label. It is the earliest-known recording of a Hendrix cover. Also that year, they cut a single as The Fabulous IMPACS — “My Baby” (b/w “I’ll Be Crying”) — for Bomb Records.

The band became a four-piece with the addition of Anthony’s younger brother, second guitarist Charles Hawkins. Seeking an edgier image, the band changed their name to Black Merda (“merda” is Latin for dung). The band backed The Temptations for a brief time in 1969, helping steer the Motown group toward psych-funk. Black Merda also backed singer Fugi (aka Ellington Jordan) on the Cadet single “Mary Don’t Take Me On No Bad Trip.” This pairing produced an album’s worth of recordings that were shelved for three decades. 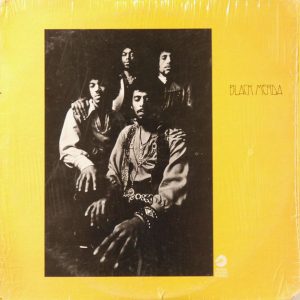 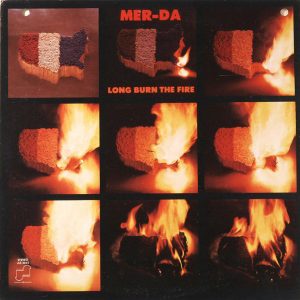 Shortening their name to Mer-Da, the band released Long Burn the Fire in 1972 on Janus Records. It features eight originals, including “We Made Up,” “Sometimes I Wish,” “Long Burn the Fire,” and “For You.” The album was produced and arranged by Gene Barge (Etta James, John Klemmer, Little Milton, The Soul Stirrers). Jazz drummer Rob Crowder (Gil Evans, The Artistic Heritage Ensemble) was added to the group for these sessions.

The members of Black Merda drifted into session work. In 2005, surviving members Veasey and the Hawkins brothers reunited amid newfound interest in turn-of-the-70s psych-funk.