Black Ivory were an American soul trio from Manhattan that released two albums on Today Records in 1971/72, followed by three albums on Buddah between 1975 and 1979. The original group consisted of vocalists Russell Patterson, Stuart Bascombe, and Leroy Burgess. Their first two albums were recorded under the auspices of producer Patrick Adams.

Russell Patterson and Stuart Bascombe formed a soul duo in 1969. Soon thereafter, they met Leroy Burgess (aka Leroy O’Niel Jackson Jr.) and asked him to be their lead vocalist. The trio initially called itself Mellow Souls. Up-and-coming producer/arranger Patrick Adams discovered the group and suggested a name-change to Black Ivory. He signed them to his fledgling label Today Records, a soul division of Perception. 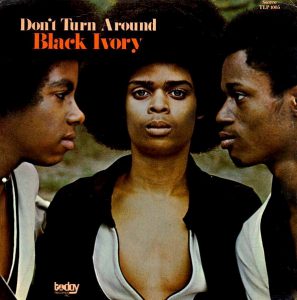 The first Black Ivory album, Don’t Turn Around , appeared in 1971. It features 10 songs, mostly written between Adams and the group. The songs include “I Keep Asking You Questions,” “She Said That She’s Leaving,” “Got to Be There,” “Don’t Turn Around,” and “You and I.” The album was recorded at Philadelphia’s Sigma Sound Studios and NYC’s Blue Rock Studio and Sound Ideas Studios. 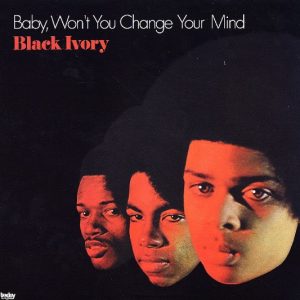 In 1974, Black Ivory issued the funky non-album 7″ “What Goes Around (Comes Around)” (b/w “No One Else Will Do“) on Kwanza Records. The following year, they resurfaced on Buddah Records with the album Feel It. It features nine songs, including “Love, Won’t You Stay,” “Your Eyes Say Goodbye,” and the title-track. The album was produced by once-and-future pop star Robert John, who scored a huge hit in 1979 with “Sad Eyes.” Adams, who was now busy launching Ace Spectrum, played a smaller role on Feel It as co-arranger.

John also produced Black Ivory’s eponymous fourth album, released in 1976. By the time of 1979’s Hangin’ Heavy, the group was down to Patterson and Bascombe. Burgess, now partnered behind the scenes with Adams, played keyboards on the album.

Burgess became heavily active as a writer, arranger, and producer on assorted projects, including acts on Atlantic (Phreek, Change), RFC (Venus Dodson), De-Lite (Dazzle), and Salsoul (Logg, Inner Life). During the mid-1980s, he cut a pair of albums in the R&B combo Aleem.

The seventh and final Black Ivory album of the 20th century was Then and Now, released on Panoramic Records in 1984.