Bakerloo was an English blues-rock trio from the Midlands that released a self-titled album on Harvest in 1969. They broke up immediately afterward and another band (later known as Hannibal) toured the album under their name. Guitarist Clem Clempson joined Colosseum and became a prominent journeyman (Humble Pie, Greenslade, Snafu, Cozy Powell). Bassist Terry Poole initiated another power-trio, May Blitz.

Bakerloo formed in February 1968 in Tamworth, Staffordshire, when guitarist Clem Clempson (b. 1949) and bassist/singer Terry Poole, both newcomers, started jamming as the Bakerloo Blues Line, named after the Bakerloo line of the London Underground.

They initially tried ex-Deep Feeling drummer John “Poli” Palmer, who promptly went to the Blossom Toes, then Family. Bakerloo next jammed with drummer John Hinch, who surfaced in an early lineup of Judas Priest. Things finally clicked with the uncannily named drummer Keith Baker (b. 1950), a fellow newcomer.

Birmingham rock manager Jim Simpson added Bakerloo to his list of clients (Locomotive, Tea and Symphony). He booked the young trio at his new club, Henry’s Blueshouse, and put them on a package tour dubbed the ‘Big Bear Ffolly’ with another up-and-comer, Earth, which soon changed its name to Black Sabbath. In October, Bakerloo played a high-profile gig at London’s Marquee as the opening act for Led Zeppelin. 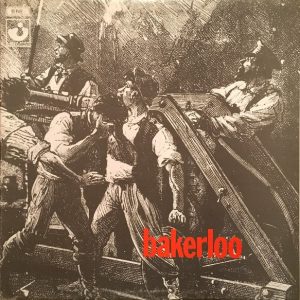 Bakerloo released their self-titled album in August 1969 on Harvest. Side one features two Clempson/Poole numbers (“Big Bear Ffolly,” “Last Blues”), a Baker co-write (“Gang Bang”), a Willie Dixon cover (“Bring It on Home”), and an adaptation of Bach’s Bourrée in E minor (“Drivin’ Bachwards”), the same piece appropriated that year as “Bourée” by Jethro Tull on their second album Stand Up. The flipside of Bakerloo contains two lengthy Clempson/Poole pieces: “This Worried Feeling” and the 15-minute “Son of Moonshine.”

Bakerloo was produced by Gus Dudgeon, who also produced 1969 Harvest titles by Michael Chapman (Window) and Tea and Symphony (An Asylum for the Musically Insane), which both feature guest appearances by Clempson. The engineer on all three albums, Barry Sheffield, also worked that year on the second self-titled album by David Bowie (colloquially known as Man of Words, Man of Music).

Poole illustrated the Bakerloo gatefold cover in a style reminiscent of 19th century news art. He created the piece in art school based on a story he read about an 1880s mining disaster.

Bakerloo was the sixth album released on Harvest, preceded only by the Edgar Broughton Band, The Fourth Way, Third Ear Band, and the first two albums by Deep Purple. A single release was planned for “Drivin’ Bachwards,” backed with the non-album “Once Upon a Time.” (Discogs and 45cat contain no such entry, though the slated catalog number was HAR 5004.)

By the time Bakerloo hit the shelves, Clempson broke from the rhythm section. He initially planned to form another power trio with drummer Cozy Powell, but instead joined Colosseum as the replacement for guitarist James Litherland (who formed Mogul Thrash). Clempson played on Colosseum’s 1970/71 albums Daughter of Time and Live, plus the 1972 album A Story Ended by their saxophonist Dick Heckstall-Smith.

Simpson, who’d already booked Bakerloo for a string of promotional dates, passed the job to another new band under his management. Once the band fulfilled their obligations as “Bakerloo,” they changed their name to Hannibal and released a self-titled album on B & C.

Meanwhile, Poole and Baker formed May Blitz with singer James Black. However, they both cleared out before that band released its two albums on Vertigo.

In 1971, Clempson replaced Peter Frampton in Humble Pie for a four-album stint. After mid-’70s appearances on albums by Greenslade and Roger Daltery, he cut an album apiece in the hard-rock supergroups Rough Diamond and Champion.

During the early 1980s, Clempson played on albums by Jack Bruce (I’ve Always Wanted to Do This) and Jon Anderson (Animation). He also cut two albums with Shadowshow, a jazz-rock band with Rod Argent, Barbara Thompson, and Jon Hiseman.

Poole briefly joined psych-rockers Rupert’s People and played on their songs “I See You’ve Changed” and “Reflecting.” He then teamed with Eyes of Blue drummer John Weathers (later of Gentle Giant) in Magick, the backing band of keyboardist Graham Bond on his 1971 Vertigo release We Put Our Magick On You. Pool also played on albums by Colin Blunstone and Paul Brett.

Baker spent the early weeks of 1970 in a group called Daddy, but left before they became Supertramp. He joined Uriah Heep late in the sessions for their first album, …Very ‘eavy…Very ‘umble, which features him on “Bird of Prey.” After their second album, Salisbury, Baker dropped from the scene. One of his last appearances is on the vaulted 1972 album The New Hovering Dog by Cochise guitarist BJ Cole.

Armada
Armada were an English art-rock band that was active through several iterations between 1970 and 1...
Centipede
Centipede was an English avant-garde jazz big-band led by pianist Keith Tippett for the 1971 RCA/Neo...
Eire Apparent
Eire Apparent was an Irish psychedelic pop band that made the album Sunrise, produced by Jimi Hend...
The Raspberries
The Raspberries were an American pop-rock band from Mentor, Ohio, that released four albums on Ca...
The Passage
The Passage were an English New Wave/art-pop band from Manchester that released two EPs on small-p...