Badger was an English symphonic hard-rock band that released a live album on Atco/Atlantic in 1973, followed by the Epic studio release White Lady in 1974.

Parrish (real name Brian Morris) released an album the prior year with bassist Paul Gurvitz, then between stints in Gun and Three Man Army. They first partnered in 1964 when they toured Europe as The Londoners. During the mod era, they cut six singles as The Knack. Between his pairings with Gurvitz, Parrish cut two singles with psychsters New York Public Library.

Kaye (real name Tony Selvidge) started in beatsters The Federals, which issued multiple 1963–65 singles on Parlophone. He then joined original Small Faces keyboardist Jimmy Winston for the 1968 feakbeat classic “Real Crazy Apartment,” released as Winston’s Fumbs. Kaye next appeared in Mabel Greer’s Toyshop, which morphed into Yes. He played on their first three albums: Yes, Time and a Word, and The Yes Album, all dominated by his thick, rhythmic Hammond organ work.

In early 1972, Kaye played on the debut album by Flash, formed by guitarist Peter Banks, an erstwhile bandmate from Yes who left after Time and a Word. This caused long-held speculation that they formed Flash together as a spinoff from Yes when, in fact, Kaye declined Banks’ invitation to join Flash, which subsequently went without a keyboardist.

Foster started in beatsters The Warriors with future members of Yes (Jon Anderson), King Crimson (drummer Ian Wallace), and Jackson Heights (keyboardist Brian Chatton). They cut one 1964 single on Decca. In 1968, Foster and Wallace cut two singles in psych-rockers Sleepy. As a writer, Foster collaborated with Anderson on the early Yes songs “Sweet Dreams” and “Time and a Word.”

Dyke first drummed professionally in 1963 as a member of Merseyside beatsters The Remo Four, which later welcomed singer Tony Ashton. That band spawned Ashton Gardner & Dyke, a post-psych R&B trio that released three albums and a soundtrack between 1969 and 1972.

Badger’s first album was culled from a December 15/16, 1972, concert performance at London’s Rainbow Theatre. The headline act that evening, Yes, recorded the event for their live triple-album Yessongs and accompanying concert film. 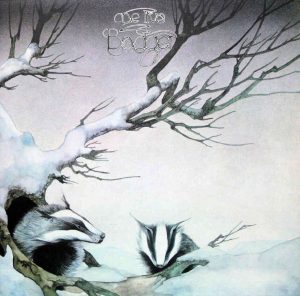 The Badger performance was released as One Live Badger in June 1973 on Atlantic (UK, Europe, Japan) and Atco (North America). It features one short Parrish piece (“The Preacher”) and five group-written numbers, all in the seven-minute range: “Wind of Change,” “Wheels of Fortune,” “River,” “Fountain,” and “On the Way Home.”

Original vinyl copies of One Live Badger are housed in a gatefold sleeve designed by illustrator Roger Dean, who designed the gatefolds for every 1972–75 Yes album (post-Kaye) and also did cover art for Osibisa, Greenslade, and Uriah Heep. The frosty out-spread depicts a snow-covered hillside tree formation with a European badger peeking out from the trunk. On the inner-spread, red-lighted concert photos of each member surround the credits with a pop-up badger at the middle-crease.

Between the first and second Badger album, Parrish and Foster cleared out for guitarist Paul Pilnick and bassist Kim Gardner. Pilnick, a veteran of numerous ’60s Merseyside acts, most recently played on the 1972 debut album by Stealers Wheel. Gardner, a late-period member of The Creation, was Dyke’s cohort in Ashton Gardner & Dyke. Most recently, Gardner played on the 1973 release Stress & Strain by ex-Manfred Mann/Chapter Three musician Mike Hugg.

Badger hired singer, guitarist, and songwriter Jackie Lomax as their frontman and musical director. Lomax, another veteran of the early ’60s Mersey scene, recorded for the Beatles Apple label and had three solo albums to his name. Under his leadership, Badger abandoned the heavy symphonic soul-rock of One Live Badger for a funkier, more laid-back style akin to American Southern boogie and West Coast harmony pop. 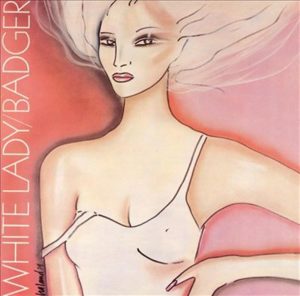 Sessions for the second Badger album took place at Sea-Saint Recording Studio in New Orleans, Louisiana, with local legend Allen Toussaint in the producer’s chair. The resulting White Lady appeared in May 1974 on Epic. It features 10 Lomax originals, including “The Hole Thing,” “Everybody… Nobody,” and “One More Dream to Hold.”

White Lady was engineered by Ken Laxton and Roberta Grace — both present on Toussant-produced recordings by The Meters, The Wild Tchoupitoulas, and Chocolate Milk — and remixed by Englishman Bob Potter (Bell + Arc, Curved Air, Lindisfarne, Snafu).

Artist David Croland did the White Lady cover illustration. It depicts a middle-shot of a young white woman, presumably a model, standing against a side-lit pink wall in a white slip dress with platinum, upward-blown hair. Croland’s distinct style is also seen on the cover of Glorious, the 1977 release by singer Gloria Gaynor.

The back cover features a group-shot of the leisurely, feather-haired quintet by photographer Lee Friedlander, a 20-year veteran of visual credits on jazz and blues albums on Atlantic, Columbia, Impulse, and Verve; including titles by Freddie Hubbard, Joe Zawinul, Miles Davis, Roland Kirk, Roy Ayers, and Solomon Burke.

In the UK and Germany, Epic paired the songs “White Lady” and “Don’t Pull the Trigger” on a 7″, issued as White Lady and Badger: a reference to the band’s split into two camps with the Lomax/Gardner faction named after the album.

Parrish made a guest appearance on the 1975 Threshold release Kick Off Your Muddy Boots by the Graeme Edge Band, the Moody Blues drummer’s hard-rock project with the Gurvitz brothers. In 1976, Parrish released a solo album, Love On My Mind, on Barn Records Ltd.

Kaye surfaced in Detective, an LA-based English–American hard-rock supergroup that released two albums in 1977 on Led Zeppelin‘s Swan Song label. After an early ’80s stint in Badfinger, he rejoined Yes for their 1984 9012Live tour and subsequent three studio albums.

Lomax resumed his solo career with the 1976/77 Capitol releases Livin’ For Lovin’ and Did You Ever Have That Feeling? After years of silence, he reunited with Gardner in Los Angeles during the mid-80s as part of Tea Bags, an informal, unrecorded jam group formed by Ian Wallace that sometimes featured Peter Banks and singer Graham Bell (Skip Bifferty, Every Which Way).

Dyke played on the first two albums by Canadian hard rocker Pat Travers. In 1978, he moved to Germany, where he played on albums by Achim Reichel and formed the blues-rock trio Bauer + Garn + Dyke.