Audience was an English folk-psych band that debuted with the 1969 album Audience on Polydor. Between 1970 and 1972, they released three albums on Charisma: Friend’s Friend’s Friend, The House on the Hill, and Lunch. Frontman Howard Werth subsequently formed the Moonbeams. Reedist Keith Gemmell joined Stackridge for a two-album stint during the mid-1970s.

Audience grew from the Lloyd Alexander Real Estate, an R&B/beat group that issued the 1968 single “What You Gonna Do” (b/w “Gonna Live Again”) on President Records. Real Estate featured guitarist/singer Howard Werth (b. 1947), reedist Keith Gemmell (1948–2016), and bassist/lyricist Trevor Williams (b. 1945). When the three broke off to form a new band, they called in drummer Tony Connor, who auditioned months prior for a slot in Real Estate.

Within weeks of starting rehearsals, Audience gained a residency at Ronnie Scott’s Jazz Club in Soho and signed a publishing contract with Essex International (Locomotive, The Move, Pink Floyd, Procol Harum), which led to a record deal with Polydor. 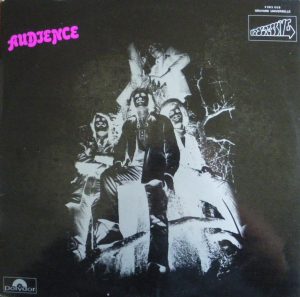 Original UK copies of Audience are housed in a thin textured paper sleeve. The cover, designed by Paragon Publicity, shows a photo-negative of the band against a tree.

Polydor lifted no singles from Audience, which was pressed in small numbers and soon became a high-priced collector’s item. The contract was quickly annulled.

“House On The Hill” appears on the 1969 Polydor comp Way In to the 70’s with cuts by Ten Wheel Drive, Taste, and Tony Williams Lifetime. “Banquet” appears on the 1970 label comp Pop Sound 70 with tracks by The Who and the Bee Gees; as well as on Polydor Presents Rock Party, a two-LP set with songs by Savage Rose, Jimi Hendrix, Fat Mattress, Cat Mother, Cream, Jack Bruce, Blind Faith, Stone the Crows, and Ashton, Gardner & Dyke.

In late 1969, as Audience courted press and concertgoers, filmmaker Barney Platts-Mills commissioned the band to write the score for Bronco Bullfrog, a film on East End skinhead culture.

Audience released their second album, Friend’s Friend’s Friend, in May 1970 on Charisma (UK) and Philips (Europe, NZ, Japan). It features four songs per side, including the group-written “Ebony Variations” and the eight-minute Gemmell/Connor epic “Raid.” The remaining tracks are Werth/Williams compositions, including “Right In Their Side,” “It Brings a Tear,” “Nothing You Do,” and the climactic “Priestess.”

Original copies are housed in a gatefold sleeve designed by CCS Advertising Associates Ltd. The watercolor image shows a caravan of colorful people and anthropomorphic animals lined across a green field behind a blue-tousled pan flutist. The inner-spread shows tongues agape as the same crowd flies in the opposite direction.

Charisma lifted “Belladonna Moonshine” as a single, backed with the non-album Werth/Williams song “The Big Spell.”

“It Brings a Tear” appears on the 1970 US Elektra comp Garden of Delights, a three-LP set with cuts by Love, Gulliver, Earth Opera, Incredible String Band, The Stooges, Atomic Rooster, Renaissance, and the Voices of East Harlem. Elektra would issue the next two Audience albums stateside.

For their third album, Audience teamed with producer Gus Dudgeon, who worked on 1969–70 albums by Al Stewart, Bakerloo, David Bowie, Locomotive (We Are Everything You See), Strawbs, and Tea and Symphony. Most recently, he produced Spring, John Kongos, and the star-making albums of his main client, Elton John. 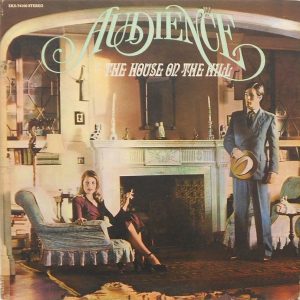 The House on the Hill appeared in April 1971 on Charisma (UK), Elektra (US, Canada), and Philips (Japan, Oceania, Italy, Germany). The album features six Werth co-writes: two with Gemmell (“Jackdaw,” “Your Not Smiling”) and four with Williams (“I Had a Dream,” “Nancy,” “Eye to Eye,” “The House On the Hill”). “Raviolé,” Werth’s classical instrumental that concludes side one, features the London Symphony Orchestra, arranged by Robert Kirby (Nick Drake, Phillip Goodhand-Tait, Shelagh McDonald, Spirogyra, Vashti Bunyan).

Side two contains Audience’s first and only cover, the ominous perennial “I Put a Spell on You,” a 1957 hit for Screamin’ Jay Hawkins that was recently re-popularized by the Crazy World of Arthur Brown and the Alan Price Set.

Sessions for The House on the Hill took place at Trident Studios. Select passages feature electric classical guitar (Werth) and vibraphone (Connor), plus Dudgeon on maracas and cowbell.

Hipgnosis, the London post-psych design firm, rendered the album’s bleak gatefold imagery. It shows a formally attired, ’40s style man and woman looking curiously aside in a living room (front) while a butler drags a dead man through the hallway (back). The inner-spread shows a cross-street photo of the haunted Victorian house in which the scene unfolds. Elektra copies present the nameplate in curly serif type.

The House on the Hill was directly preceded by the Dudgeon-produced single “Indian Summer,” a buoyant acoustic plucker (b/w the earlier “It Brings a Tear”). Elektra added the song to North American pressings of the album. It also appears on the 1972 Brazilian Philips comp Hot Road with cuts by Drama and Manfred Mann’s Earth Band.

Audience toured the US in late 1971 with Faces and Cactus. Upon their return to the UK, a road-worn Gemmel left the band in January 1972.

Audience was half-finished recording their fourth album at the time of Gemmell’s departure. They completed the album with saxophonist Bobby Keys and trumpeter Jim Price, also heard on the 197/72 Rolling Stones albums Sticky Fingers and Exile On Main Street. Pianist Nick Judd joined as a fifth member. 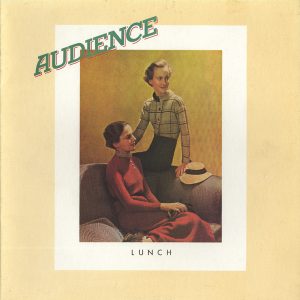 Hipgnosis designer George Hardie did the cover, which features a stock photo of two women from a 1930s fashion catalog. The inner-spread pictures eight people: the original quartet, plus Judd, Dudgeon, Keys, and Price.

Audience toured in support of Lunch with Judd and soprano saxist Pat Charles Neuberg. They disbanded in the late summer of 1972 when Williams quit and Judd jumped to another sinking ship, Juicy Lucy. The following year, Charisma released Audience, a compilation of material from the last two albums, plus the unissued Werth/Williams number “Elixir of Youth.”

Werth formed the Moonbeams with guitarist Bob Weston (Ashkan, Fleetwood Mac) and issued the 1975 album King Brilliant on Charisma. His only solo album to date, 6ix of 1ne and ½ a Dozen of the Other, appeared in 1982.

Gemmell teamed with ex-Quatermass drummer Mick Underwood for the 1972 Philips one-off Sammy. He then joined Stackridge for their 1975/76 albums Extravaganza and Mr. Mick. In 1983, he joined the Pasadena Roof Orchestra, an ever-touring 1930s-style big band. He died in 2016 of tongue cancer.

Connor drummed Hot Chocolate to chart success during the late 1970s. Williams turned up in Jonathan Kelly‘s Outside alongside ex-Byzantium/future-Blockhead keyboardist and songwriter Chas Jankel.

Time
Time were an English hard-rock band that released a self-titled album on Buk Records in 1975. The ...
Lou Rawls
Lou Rawls (Dec. 1, 1933 — Jan. 6, 2006) was an American soul singer from Chicago who began in gosp...
Felt
Felt were an American hard-rock/psych band from Arab, Ala., that released a self-titled album in 1...
Vita Nova
Vita Nova were a Munich-based symphonic/psych trio comprised of German multi-instrumentalist Eddy ...
Chilli Willi & The Red Hot Peppers
Chilli Willi & The Red Hot Peppers were an English rustic-rock band that released the album Ki...