Atlantic Ocean was a Swedish psych band that issued a standalone single on CBS in 1969, followed by the concept album Tranquillity Bay on Love Records in 1970. This was an early band for reedist Björn J:son Lindh (Ablution, Baltik) and musician/composer Greg FitzPatrick, who later collaborated with Samla Mammas Manna. Both played immediately afterward in Handgjort.

They formed in 1967 as The Quints, a Dixieland-turned-beat group. Their output was limited to a song apiece on three 1967 Swedish pop compilations: “Distant Love” (Zingotoppen: Finalmelodier I 1967 Års Popbandstävling, LP), the Monkees cover “I’m a Believer” (Jukebox, EP), and the Rolling Stones cover “Let’s Spend the Night Together” (Come on and Sing, ‎EP). 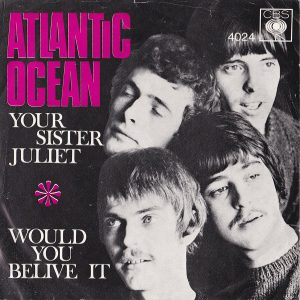 In 1969, Atlantic Ocean cut the CBS single “Your Sister Juliet” (b/w “Would You Believe It”), both band-written originals produced by John Goodison and Mike Smith. That September, they cut their lone album at Philips Sound Studios in Stockholm. 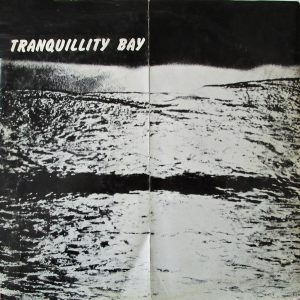 Atlantic Ocean released their singular album, Tranquillity Bay, on Love Records in October 1970, thirteen months after sessions wrapped. Side A consists of five proper songs segued with spoken-word interludes. The 19-minute “Weather: Snow, Wind, Sun” consumes all of side B. Fitzpatrick produced the album under his Göran Ahlin pseudonym.

Tranquillity Bay was engineered by Rolf Plahn (Hansson & Karlsson, Choralerna). Original copies are housed in a center-split, threefold cover with a b&w night image of the high seas. The inner-spread shows imagery of wartime strife.

Some months prior to the album’s release, Atlantic Ocean served as the “orchestra” on the soundtrack of the 1970 Swedish romantic-drama En Kärlekshistoria (A Swedish Love Story). The accompanying album is credited to composer Björn Isfält, singer Anita Lindblom, and Staffan Stenström, who sings lead on four numbers (“Talk to Me,” “Oh No,” “Wake Up in the Morning,” “Would You Like to Be”).

By the time Tranquillity Bay hit shelves, the members of Atlantic Ocean had already moved on to other projects. J:son Lindh and Bandel formed Jason’s Fleece, which cut a 1970 self-titled album on Mercury. The pair also played on a one-off single by Sommarfilosoferna: “På En Sommardag,” a Swedish-language cover of Mungo Jerry’s then-current hit “In the Summertime.” Additionally, they played on När Dimman Lättar, the debut album by singer/songwriter Bernt Staf. With Fitzpatrick, they formed the ethno-folk ensemble Handgjort, which issued an eponymous 1970 album on Silence Records.

Bergman played flute on Sagan om Ringen (aka Music Inspired by Lord of the Rings), the popular 1970 debut solo album by Bo Hansson. He then joined the avant-jazz/folk group Fläsket Brinner and played on their 1971 debut and its 1972 two-record followup, the half-studio/half-live Fläsket. Between 1972 and 1977, he played on albums by Mats Glenngård, Mikael Ramel, and further titles by Hansson. In 1973, he reunited with Bandel, Fitzpatrick, and Stenström in the politi-folk ensemble Tillsammans. Bergman’s one solo album, Lyckohjulet, appeared on Metronome-subsidiary Gump in 1974.

Stenström surfaced in rockabilly revivalists the Rohdes Rockers, which debuted with a 1973 live album on Polydor and issued five albums on Marilla between 1976 and 1979 at the height of the ’50s retro craze.

Bandel played drums/percussion on J:son Lindh’s first four solo albums and notched credits on numerous other titles between 1971 and 1982, including albums by Janne Schaffer, Magnus Uggla, and Ragnar Grippe. He also joined J:son Lindh on the 1973 Baltik album.

Mowinckel formed the blues-psych combo Sogmusobil and played guitar and sundry percussion on their 1971 Gump release Telefon. He and bandmate Einar Heckscher then formed the jazz-rock trio Levande Livet, which released the 1973 album Strömmens Pärla on Silence.

Fitzpatrick headed the Handgjort and Tillsammans projects. Between 1971 and 1981, he played on albums by Turid, Coste Apetrea, and Ståålfågel. In 1976, he collaborated with Samla Mammas Manna on Snorungarnas Symfoni, his own four-part composition. As a solo artist, he released the 1977/78 albums Det Persiska Äventyret and Bildcirkus on MNW/Mistlur. During the 1980s, he produced the synthpop band Adolphson-Falk.

As of 2021, Tranquillity Bay has yet to be reissued. According to Discogs, copies of the album sell at a median price of $235.97.