Ashkan was an English blues-rock band that released the album In From the Cold on Decca in 1969. Guitarist Bob Weston joined the 1973 incarnation of Fleetwood Mac.

Weston (1947–2012) hailed from Plymouth, Devon, where he studied violin as a child before taking up guitar at age 12. In the mid-1960s, he moved to London, where he joined The Kinetic, a mod-beat group that worked the French market. In 1967, they released three singles and the album Live Your Life, all on Disques Vogue.

Back in London, Weston joined Black Cat Bones in early 1968 as the replacement for guitarist Paul Kossoff, who’d left with drummer Simon Kirke to form Free. Weston stayed with the band till autumn, when he cleared out for Rod Price (later of Foghat).

Weston teamed with Sims, an earlier Black Cat Bones member who cleared out for Kirke. They formed Ashkan with newcomers Bailey and Bending. Decca signed the band for its Nova series, dedicated to England’s burgeoning underground scene.

In From the Cold 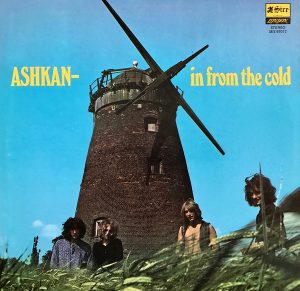 Ashkan released In From the Cold in 1969 on Decca (UK, Germany, Belgium), Disc’Az (France), and Sire (US). It features two Weston originals (“Take These Chains,” “Sligthly Country”), two group-written numbers (“Practically Never Happens,” “One of Us Two”), and three Weston/Bailey co-compositions: “Going Home,” “Stop (Wait and Listen),” and the 12-minute “Darkness.” The one cover is “Backlash Blues,” a 1967 number by Nina Simone.

Photographer Terence Ibbott (Fleetwood Mac, Chicken Shack, Synanthesia, Kathe Green, Bacon Fat, The Web) designed the cover, which shows the members of Ashkan situated before a vintage windmill. The back cover shows them from afar in a cornfield.

The original UK release of In From the Cold (cat# DN-R1) was one of the first three releases on Decca’s Nova series, along with titles by the Elastic Band, Bulldog Breed (Made in England), and Galliard (Strange Pleasure).

Weston followed up Ashkan with a stint behind Long John Baldry. In 1972, he joined boogie-rockers Ashman Reynolds for the Polydor release Stop Off. He then replaced Danny Kirwan in Fleetwood Mac for the 1973 albums Penguin and Mystery to Me. Over the next five years, he played on albums by Dana Gillespie, Murray Head (Say It Ain’t So), Howard Werth & The Moonbeams, Sandy Denny, Adrian Wagner, and Kirwan. Weston’s debut solo album, Studio Picks, appeared on International AZ in 1981.