Arzachel was an English psych-rock band, originally known as Uriel, that released a self-titled album on Evolution in 1969. After the departure of guitarist Steve Hillage, the remaining band released three further albums as Egg between 1970 and 1974.

Keyboardist Dave Stewart headed the bands Hatfield & the North and National Health during the mid-to-late 1970s. After reuniting with Stewart in Khan, Hillage joined Gong for three albums and then launched a solo career.

The band formed as Uriel in early 1968 at the City of London School when bassist Mont Campbell teamed with keyboardist Dave Stewart and guitarist Steve Hillage.

Campbell (b. 1950, Ismaïlia, Egypt) initially played guitar and French horn. He switched to bass after witnessing Hillage (b. 1951) and inviting him into a blues-rock band with Stewart (b. 1950, Waterloo), who had played in a school covers band called The Southsiders.

Uriel, named after the archangel of wisdom, placed an ad in Melody Maker that netted drummer Clive Brooks (1949–2017). They jammed for several months to a setlist comprised of songs by Cream, The Nice, and the Jimi Hendrix Experience. In May 1968, they entered a demo studio in Holland Park and taped a cover of “Saturn, the Bringer of Old Age” by English composer Gustav Holst.

Later that summer, Hillage left Uriel to attend university. The remaining band continued as an organ-based power trio under a new name, Egg. In the spring of 1969, they signed an exclusive deal with Decca.

Days later, Egg was contacted by another company, Zackariya Enterprises, with the offer to cut a psychedelic jam album. They reunited with Hillage for the occasion. To avoid legal conflict with Decca, the reformed Uriel went by a new name, Arzachel, taken from a moon crater named by 17th century astronomer Giovanni Riccioli. 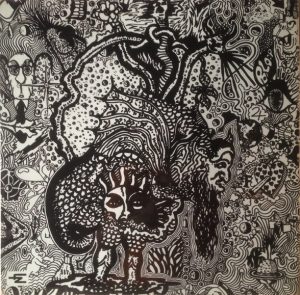 Arzachel appeared in 1969 on Evolution, a short-lived pop and psych label owned by Mohamed Zackariya. Side one contains four short tracks, including the group pieces “Leg,” “Azathoth,” and “Garden of Earthly Delights.” The second side consists of two lengthy jams: “Clean Innocent Fun” and “Metempsychosis.” The one non-original, “Soul Thing (Queen Street Gang Theme),” is credited to BBC composer Keith Mansfield.

The back cover features a semi-fictional bio of each member, stating that Campbell “believes that music stems largely from the sexual urge” and that Brooks “has been known to break fourteen sticks in as many bars.” About Stewart, the notes say that “he could play the piano when only two years old” and that he was later expelled from school and “spent eight months living on crusts, playing a battered accordion on street corners.” Among his influences, the notes list Mike Ratledge (Soft Machine) and Vincent Crane (Crazy World of Arthur Brown, Atomic Rooster).

Arzachel was recorded and mixed in a single session. It was one of only two full-length albums on Evolution, which mostly issued pop-vocal singles. The label’s other album release was the self-titled debut by Raw Material, which appeared in 1970.

Stewart, Campbell, and Brooks reverted to Egg and released the albums Egg and The Polite Force on Decca’s Deram imprint in 1970/71. In 1972, Stewart reunited with Hillage in Khan for the Deram release Space Shanty.

Dave Stewart subsequently joined Hatfield in the North, formed by ex-members of Delivery and Matching Mole. They released two albums on Virgin, then morphed into National Health.

Steve Hillage joined Gong for their 1973/74 Radio Gnome Invisible trilogy, which comprised the albums Flying Teapot, Angel’s Egg, and You. In 1975, he launched a lengthy solo career with the album Fish Rising on Virgin.

Arzachel was first reissued in 1992 by German archivists TRC Records. In 2007, Egg Archive issued Arzachel (Collectors Edition), credited to Uriel with the full 1969 album plus six 1968 demos from their time as Uriel.

Colin Scot
Colin Scot (1941–1999) was an English–Canadian singer–songwriter released a self-titled album in 197...
Tully
Tully were an Australian folk-psych band from Sydney that released a self-titled album on Columbia i...
Thelma Houston
Thelma Houston is an American soul singer who debuted with a pair of Capitol singles circa 1966/67...
Steve Miller Band
The Steve Miller Band are an American classic-rock band from San Francisco that released 14 studi...
The Dave Clark Five
The Dave Clark Five were an English beat group from Tottenham, named after drummer/businessman Dave...