Argent was an English art-rock band that released six studio albums and a live double-LP on Epic between 1970 and 1975, followed by a seventh on RCA. They were the namesake of ex-Zombies keyboardist Rod Argent. On their first five albums, Argent was a four-piece with singer/guitarist Russ Ballard, who found success outside the band as a songwriter.

Musically, Argent evolved through three-distinct phases: the moody art-pop of their 1970/71 albums Argent and Ring of Hands; the heavier rock of their 1972/73 releases All Together Now and In Deep; and the spacier vibe of their 1974/75 albums Nexus, Circus, and Counterpoints. Over time, the band embraced lavish sounds, epic song-forms, and elongated musical passages.

Argent formed in late 1968 upon the dissolution of beat legends The Zombies, which featured keyboardist Rod Argent and bassist Chris White. They wrote songs separately in that band but worked as a songwriting and production team for most of Argent’s existence.

The initial Argent formation included journeyman musician Mac MacLeod (Hurdy Gurdy), who cut three demos with the band: “Telescope,” “To Julia (For When She Smiles),” and “Girl Help Me.” In 1969, the four-piece lineup of Argent coalesced with ex-Roulettes/Unit 4+2 members Russ Ballard (guitar/vocals) and Bob Henrit (drums). White opted for a behind-the-scenes role, so Rod Argent enlisted his bassist cousin Jim Rodford, formerly of The Mike Cotton Sound. 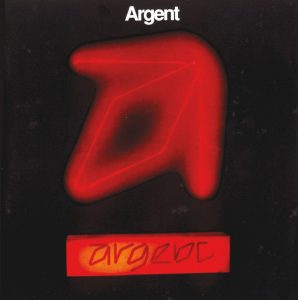 Argent released their self-titled debut album in January 1970 on CBS (UK). It was recorded the prior fall at London’s Sound Techniques. Rod and White co-wrote seven of the 10 tracks, including “Dance in the Smoke,” “Be Free,” “Freefall,” and “Stepping Stone.” Ballard contributed three songs: “Schoolgirl,” “Lonely Hard Road,” and “Liar.” The last of those was covered during the ensuing half-decade by Three Dog Night (US #7), Capability Brown, and The Meters. The red neon cover was designed by Tony Lane, who also did the cover for Red Clay by Freddie Hubbard. The main musical characteristics of Argent (airy/tender vocals, dark/haunting keyboards) uphold the Zombies’ sound.

Argent was issued abroad on CBS-subsidiary Epic, the band’s home for their next five albums. 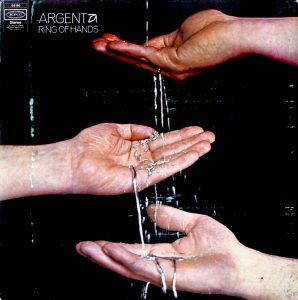 Later in 1970, Argent was back at Sound Techniques laying tracks for their second album. The resulting Ring of Hands appeared in February 1971. This album features six Argent/White compositions, including “Lothiorien,” “Pleasure,” and “Sleep Won’t Help Me.” Ballard contributed “Where Are We Going Wrong,” “Cast Your Spell Uranus,” and “Chained.” The last of those was recorded the following year by Three Dog Night; their second Ballard cover in as many years. The opening track, “Celebration,” was issued as a single with the non-album b-side “Kingdom.”

Also in 1971, Rod and White produced and contributed three songs (“She Loves the Way They Love Her,” “Smokey Day,” and “Her Song”) to One Year, the debut solo album by ex-Zombies bandmate Colin Blunstone. He’s backed by the full band on three tracks (“She Loves the Way…,” “Caroline Goodbye,” and “Mary Won’t You Warm My Bed.”) Rod Argent also played on two tracks on the album Pigmy by folk-rocker Keith Christmas. 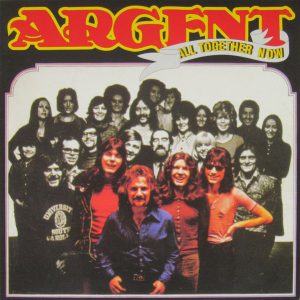 Argent’s third album, All Together Now, was released in July 1972. It was recorded the prior year at Abbey Road Studios. Side one is bookended by the Argent/White anthems “Hold Your Head Up” and “I Am the Dance of Ages.” The flipside features the urgent Hammond rocker “Be My Lover, Be My Friend” and the four-part, 13-minute suite “Pure Love.” Ballard contributed the funk-rocker “Tragedy” and the retro-boogie “He’s a Dynamo.” On this and the following album, the band embrace a gruffer organ-rock sound comparable to Uriah Heep. “Hold Your Head Up” was issued as a single (UK #5, US #5) with Ballard’s non-album b-side “Closer to Heaven.”

That same year, Rod and White produced Blunstone’s sophomoric solo effort Ennismore. It features one writing contribution from the pair (“Andorra“) and the first recording of Ballard’s “I Don’t Believe in Miracles.” Once again, the complete band are among the singer’s musical backing. Elsewhere, Rod Argent played on two tracks on You Are the Music …We’re Just the Band, the third album by hard-rockers Trapeze. Meanwhile, Ballard wrote and produced the first two singles by Bell Records pop act Hello. 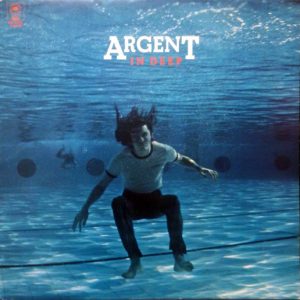 In March 1973, the band dropped their fourth album, In Deep. The eight-track set is equally split between contributions from the Argent/White and Ballard camps. The former contributed “Candles on the River,” the gruff/churning “Be Glad,” and the swelling/spacey “Losing Hold.” Ballard’s “God Gave Rock and Roll to You” (UK #18) was later covered by Kiss, who removed the line about Cliff Richard from the lyrics.

Also in 1973, Ballard and Henrit played on the debut albums by Leo Sayer (Silverbird) and Roger Daltery. Concurrently, Rodford and Henrit played on the tracks “Ragged Rain Life” and “Journey” on singer/songwriter Duncan Browne‘s self-titled second album. Meanwhile, each member of Argent helped in varying capacities on Lane Changer, the debut solo album by Michael Fennelly. 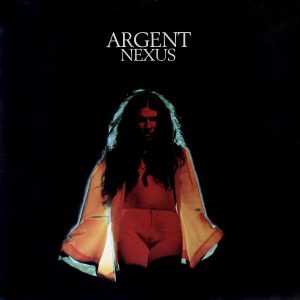 Argent’s fifth album, Nexus, appeared in March 1974. Rod and White composed the spacious “Music from the Spheres,” the melodramatic “Keeper of the Flame,” and the opening sequence of instrumentals: “The Coming of Kohoutek,” “Once Around the Sun,” and “Infinite Wanderer.” Ballard contributed the ballad “Love” and the bulk of side two, including the funky “Thunder and Lightning” and the martial “Man for All Reasons.” Musically, the band steer toward symphonic/space-rock on this release.

With five albums under their belt, Argent issued the double-album Encore: Live in Concert. The 78-minute set collects performances at London’s Theatre Royal, Drury Lane (2/24/74); St. Albans’ City Hall (3/9/74); and Swansea’s Top Rank. It features elongated renditions of the recent “Music from the Spheres” and “The Coming of Kohoutek.” The earlier favorites “I Am the Dance of Ages” and “Hold Your Head Up” are stretched to nine and eleven minutes, respectively. Ballard’s two-part “It’s Only Money” is performed in reverse order, though not listed as such. Also performed is his now-popular “I Don’t Believe in Miracles” and the Zombies chestnut “Time of the Season.”

Before the release of that live LP, Ballard left Argent and issued his self-titled debut solo album in September 1974. His slot in the band was filled by guitarist/vocalist John Verity and guitarist John Grimaldi. Verity had just released an album with his namesake band, which served as a spring 1974 opening act for Argent. Grimaldi hailed from the 1972 Deroy Records one-off Motiffe. 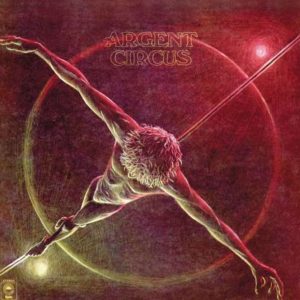 The new five-piece Argent premiered with Circus, released in March 1975. Rod Argent composed six of the album’s seven numbers, including all of side one: the thematically titled “Circus,” “Clown,” and “Highwire,” the last of those clocking in at nine minutes. His arsenal on this release consists of Fender Rhodes electric piano, acoustic piano, Mellotron, Moog synthesizer, and Hammond organ. Jim Rodford, in his first of two writing contributions to the band, composed the lengthy “Trapeze.” Verity handles the vocals in an airy, sometimes languid tone that recalls Blunstone. Rod and White co-produced this release despite not collaborating on the material. Soundwise, the album pursues a misty vibe replete with stormy instrumental passages that invoke the era’s jazz-rock.

Argent’s seventh and final studio album, Counterpoints, was released in October 1975 on RCA Victor (UK) and United Artists (US). Continuing in the vein of the prior release, Rod composed the conjoined opening numbers “On My Feet Again” and “I Can’t Remember, But Yes.” He also wrote all of side two, including “Be Strong” and “Road Back Home.” The album also contains Rodford’s seven-minute “Time” and Grimaldi’s two writing contributions to the band, “Waiting for the Yellow One” and “It’s Fallen Off.” Henrit fell ill during these sessions; his seat was deputized on select tracks by Phil Collins. Rod and White produced Counterpoints in conjunction with Tony Visconti.

Argent ran aground in 1976, purportedly due to Grimaldi’s failing health (the guitarist died in 1983 at age 28). Rod Argent played on the 1976 debut album by Easy Street, lending rippling organ to the opening harmony-rocker “Feels Like Heaven” and tender piano to the ballad “Part of Me.” He also features heavily (alongside Ballard and Verity) on Blunstone’s 1976 release Planes.

In 1977, Rod played on “Silver Lady” from the Passport Records all-star project Intergalactic Touring Band. He also played on 1977/78 albums by Gary Boyle (The Dancer), Chris Rea (Whatever Happened To Benny Santini?), The Who (Who Are You), and Andrew Lloyd Webber. In 1978, Argent released his debut solo album, Moving Home, on MCA. During the 1980s, he cut a collaborative album with jazz-rock woodwindist Barbara Thompson (Ghosts, 1982) and formed a production partnership with journeyman drummer Peter Van Hooke (Van Morrison, Mike + the Mechanics). Their greatest successes were behind German-Indian art-pop singer Tanita Tikaram, for whom they produced a series of hits in the late ’80s and early ’90s.

Henrit, Rodford, and Verity maintained their partnership in Phoenix, which cut two albums between 1976 and 1979. Rodford left before the second of those to join The Kinks, where he was later joined by Henrit. Verity surfaced in an early ’80s lineup of Charlie.

In 1995, archivists Windsong International released In Concert, consisting of seven tracks from Argent’s performance at London’s Paris Theatre on 14/12/72, plus four tracks from three 1973/74 appearances on The Old Grey Whistle Test.

Tony Williams
Tony Williams — aka Tillmon Anthony Williams (Dec. 12, 1945 — Feb. 23, 1997) — was an American pos...
Coley
Coley were an English brass-rock/funk combo that released the album Goodbye Brains on self-press C...
Bakery
Bakery were an Australian hard-rock/psych band from Perth that released two albums on Astor in 197...
Trust
Trust was a French art-rock/psych band that released the album Le Mutant on Philips in 1970. Mem...
Peter Kaukonen
Peter Kaukonen (born Sept. 23, 1945) is an American rock guitarist from Topeka, Kan., who released...