Arcadium was an English post-psych band that released the album Breathe Awhile on Middle Earth in 1969.

After some months on the UK club circuit, Acadium signed with the post-psych label Middle Earth. In October 1969, they debuted with the Sergides-penned single “Sing My Song” (b/w “Riding Alone”), produced by label co-founder Dave Howson and folkster Austin John Marshall (wife of Shirley Collins). This was Middle Earth’s second release after the debut single by Scottish psychsters Writing On the Wall. 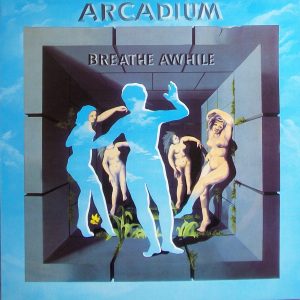 Arcadium released Breathe Awhile in November 1969 on Middle Earth. It features seven Sergides originals, including four in the four-minute range (“Poor Lady,” “Woman of a Thousand Years,” “Change Me,” “It Takes a Woman”) and one seven-minute epic (“Walk On the Bad Side”). Each side is half-consumed by an opus: “I’m On My Way” (11:52) and “Birth, Life and Death” (10:45).

Howson and Marshall co-produced Breathe Awhile with engineer Andrew Hendriksen, who also worked on 1968/69 albums by Woody Kern (The Awful Disclosures of Maria Monk), The Kinks (Arthur or the Decline and Fall of the British Empire), and Writing On the Wall (The Power of the Picts).

Breathe Awhile and Power of the Picts are two of only four albums issued on Middle Earth, which also released albums by folksters The Wooden O and Tam White before folding in 1970.

Artist Michael McInnerny, who illustrated the gatefold of Tommy by The Who, painted the Breathe Awhile cover. It shows nude Renaissance revelers in an air-bound concrete hallway with silhouetted cutaways. The back cover shows three rows of member headshots: in gas masks (top), bandages (middle), and smiling free-headed.

Arcadium disbanded upon completion of Breathe Awhile due to musical differences between Sergides and Robert Ellwood.

Sergides assembled Anaconda, a three-man, two-woman acid folk group that cut the 10″ acetate Sympathy for the Madman. In 2019, the only surviving copy was rediscovered and issued as an LP comprised of five songs: “Its Not Me,” “Riding Alone,” “Who Are We?,” “Outrider,” and the title track.

Sergides later moved to Australia and took the Anglicized name Michael Savanna Silver. During the second half of 1977, he recorded a jazz-funk album with a 13-piece band that included bassist Paul Wheeler (Aztecs, Mackenzie Theory, Coloured Balls). The Savanna Silver Band album appeared in 1978 as Pure Silver (Champagne Records) and It Takes a Woman (Image).

Robert Ellwood was briefly involved with Arthur Brown‘s Kingdom Come. His time with the band is chronicled on the Voiceprint CD Jam, comprised of nine jams circa 1970.