Arc was an English art-rock band from London, formed in 1970 by keyboardist Micky Gallagher and guitarist John Turnbull, both formerly of Skip Bifferty/Heavy Jelly. As Arc, they issued the album … at This on Decca in 1971, followed that same year by a collaborative album on Charisma with former Bifferty vocalist Graham Bell. Gallagher and Turnbull later surfaced in Ian Dury’s Blockheads.

Turnbull and Gallagher first partnered up in 1966 when their respective bands, The Primitive Sect and The Chosen Few, merged into a new band, Skip Bifferty. That band endured itself to the psychedelic underground with three singles and a 1968 self-titled album on RCA Victor. Breaking from their management, they masqueraded as Heavy Jelly for the epic 1969 Island single “I Keep Singing That Same Old Song.” Later that year, the Bifferty camp split in two when bassist Colin Gibson and singer Graham Bell formed the short-lived Griffin.

In 1970, Turnbull and Gallagher recorded an album of covers by American singer/songwriter Tim Harding. (Though initially shelved, a 1972 single on Peacock Records acquitted two cuts, “Smugglin Man” and “Misty Roses,” under the name Turnbull and Arkwright.)

Montgomery, a native of Australia, hailed from Sydney soul-rockers Python Lee Jackson, which came to the UK in 1968 and cut several sides with a pre-fame Rod Stewart.

Arc released … at This in 1971 on Decca (UK, Germany). The album features nine originals, eight co-written by Turnbull and Gallagher, including “Hello, Hello, Monday,” “Great Lager Street,” “Let Your Love Run Through,” “You’re In the Garden,” “Sophie’s Cat,” and “Four Times Eight.” Duffy contributed the second track on side one, “It’s Gonna Rain.”

… at This is a self-produced effort. Gallagher plays guitar on select passages, in addition to piano and organ. The three writers share vocal duties. The cover sports a black-framed group photo, taken in a football field by Decca photographer David Wedgbury.

Later in 1971, Montgomery cleared out for drummer Rob Tait, formerly of the Battered Ornaments and Pete Brown and Piblokto! He also played on recent albums by Kevin Ayers and Paul Korda.

Months after … at This, Arc teamed with erstwhile Bifferty frontman Graham Bell, who spent the interim in Every Which Way, a 1970 Charisma one-off assembled by ex-Nice drummer Brian Davison. 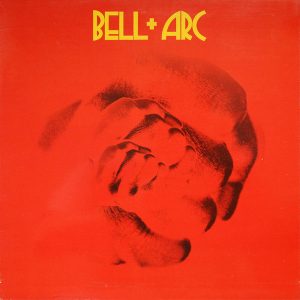 The two parties retained Bell’s Charisma ties for their merged venture, Bell + Arc, released in November 1971. The album features seven originals, including four Bell numbers (“High Priest of Memphis,” “Yat Rock,” “Dawn,” “Children of the North Prison”) and two group compositions: “Everyday” and the boogie gallop “Let Your Love Run Free” (not to be confused with “Let Your Love Run Through” from … at This).

The side one centerpiece, “Keep a Wise Mind,” is a co-write between Bell, Turnbull, and Bifferty bassist Colin Gibson, who followed Bell into Griffin and stuck through that band’s name-change to Simpson’s Pure Oxygen, an unsigned act that got shelved indefinitely when their drummer, Alan White, joined Yes. (They backed White on his 1976 “solo” album Ramshackled, essentially a band effort written and sung by the other members.)

Another member of the Griffin/SPO team, guitarist and keyboardist Kenny Craddock, plays on six tracks on Bell + Arc. White himself plays on “Keep a Wise Mind” and “Let Your Love Run Free.” The latter, plus the Dylan cover “She Belongs to Me,” feature saxophonist Bud Beadle (Ginger Baker’s Air Force, Riff Raff, Gonzalez) and trumpeter Jeff Condon. An additional guest, percussionist Jeff Woods, hailed from Tyneside legends the Junco Partners and played afterwards on the three Vinegar Joe albums.

Bell + Arc was produced by Bob Johnston (Lindisfarne) and engineered by Bob Potter (Snafu). The cover sports a yellow sans serif nameplate over a bright red background with a faint, monochrome cluster of fists at the center. The inner-spread contains five outdoor photos, one of each member; mostly bleak, bearded, and oblivious to the camera.

Bell released a solo album, Graham Bell, on Charisma in 1972. That same year, he sang “1921” on the London Symphony Orchestra’s adaptation of The Who‘s Tommy. After appearing on Warm Blood — the 1974 solo album by ex-Delivery frontwoman Carol Grimes — Bell dropped from the music world for 14 years, reappearing in the late ’80s in Snowy White’s Blues Agency.

Turnbull teamed with ex-Greatest Show On Earth bassist Norman Watt-Roy in Glencoe, a rustic-rock quartet that made two albums on Epic during 1972/73. Meanwhile, Gallagher played in Peter Frampton‘s Camel.

In 1976, Gallagher, Turnbull, and Watt-Roy formed The Loving Awareness, which issued one independent album, promoted heavily on Radio Caroline. That band collectively joined Ian Dury’s Blockheads. Turnbull and Gallagher played on the 1979/80 Dury albums Do It Yourself and Laughter. Concurrently, Gallagher played on The Clash albums London Calling and Sandinista and served as their fifth wheel on tour.