Arachnoïd were a French symphonic/space-rock band that released a self-titled album on Divox in 1979. It was later reissued by archivists Musea and has since become a holy grail of the nation’s ’70s scene, alongside releases by Ange, Atoll, Carpe Diem, Mona Lisa, Pulsar, and Shylock.

Bassist Patrick Woindrich and guitarist Michel Pilot began jamming in 1967, inspired by UK psych-rock. In 1970, they adopted the name Arachnoïd: a reference to spiders and cerebral membrane. The band gigged for several years through multiple iterations before a brief pause during the mid-1970s. 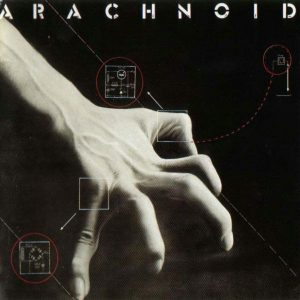 Later that decade, Arachnoïd rebooted for a more serious round of activity. In May 1978, they recorded their singular album at Studio du Chesnay. It was released in 1979 on Divox International. The album features four lengthy songs: “La Guêpe,” “Piano Caveau,” “Toutes Ces Images,” and the 14-minute epic “Le Chamadère.” The original vinyl concludes with the shorter “L’Adieu Au Pierrot.”

The title “In the Side Screen of Your Eyes” was incorrectly listed on the side-a label and back cover, despite the track not appearing on the album. It would be added to subsequent reissues, starting with the 1988 vinyl repress on Musea, which later issued the album on CD with four bonus live recordings from 1976/77. The CD issue cuts “L’Adieu Au Pierrot” down to :57 seconds and titles the remainder of the track “Final.”

Arachnoïd split soon after the original album’s release. Woindrich also played on albums by Hydravion (Stratos Airlines) and C.O.M.A. (Clinik Organik Muzak Anatomik). For much of the 1980s, he produced and sometimes augmented the latter act’s spinoff Charles de Goal.

Terpandre
Terpandre were a French symphonic-rock band that recorded an album in 1978 that was ultimately rel...
LaMont Johnson
LaMont Johnson (Oct. 1, 1941 — Oct. 21, 1999) was an American jazz pianist and composer who releas...
Malone & Barnes and Spontaneous Simplicity
Malone & Barnes and Spontaneous Simplicity were an American jazz-funk/soul duo/band combo from...
Formula 1
Formula 1 were an American soul-funk band whose material was issued on the album Hold On, released...
Mar-Vista
Mar-Vista were a French electronic combo that released the album Visions of Sodal Ye on Le Kiosqu...