Topmost issued multiple 1966–68 singles on assorted labels (RCA Victor, Columbia, Polydor) and a 1967 self-titled album on Parlophone. In 1969, Saksala interacted with Vesala on the Finnlevy release Nykysuomalaista – Contemporary Finnish, a split-album between Soulset and the Edward Vesala Jazz Band.

Apollo gained notoriety for its wild live act. For one photo shoot, the members shed their clothes and posed in body paint. 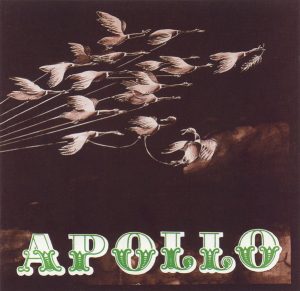 Original copies come in a gatefold sleeve that depicts seagulls in flight with a captive, rope-tied woman. The inner-spread features printed lyrics and another image of the female, anguished and captive to a group of miniature people.

“Pakoon Maailmaa” was issued as a single, backed with the non-album “Ohjelmoitu Ihminen.”

Saksala joined Kalevala and played on their 1972 debut album People No Names. During the mid-’70s, he played on albums by Hector, Pen Lee, and Punainen Lanka. In 1979, he released Vaellan Vaellan, his first of many solo albums.

Lupari played on 1973/74 titles by Kirka, Mikko Alatalo, Tuulikki Eloranta, and Penniteatteri. His solo album, Uniystävä, appeared in 1975 on Hi-Hat. He then teamed with ex-Tasavallan Presidentti singer Eero Raittinen in Rotox, which issued the 1976 album Etsikko.

Holopainen cut an album with comedy rockers Hullujussi and partook in multiple projects by Hector, including the singer’s 1977 one-off HEC.

Apollo was first reissued on CD in 2002 by Warner Music Finland Oy. The following decade, it was repressed on vinyl by Mayfair Music (Germany, 2012) and Svart Records (Finland, 2014).