Andromeda was a German organ-rock/psych band that released a self-titled album on Vogue in 1970. 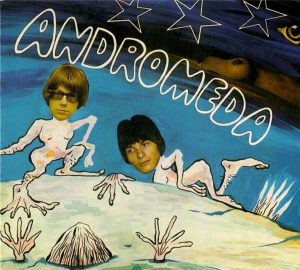 Andromeda centered on the duo of keyboardist Peter Schild and drummer Günter Steinborn, both members of Cologne beatsters The Tony Hendrik Five. Hemdrik himself played guitar on the duo’s singular album, released in 1970 on Vogue Schallplatten. The album features seven songs, including “Andromeda” (a treble), “Cosmos Main Road,” “A World on a Star,” and the epic “Rockets.” Schild wrote/co-wrote all the songs apart from the Hemdrik contribution “Galaxy of Beauty, Galaxy of Nightmares.” Basswork is handled by fellow THF alumni Gerry Fleming. The recording was overseen by Conny Plank at Rhenus-Studio, Godorf/Köln.

Andromeda was first reissued in 1997 by German archivists Second Battle and again in 2016 by a Russian label masquerading as Second Battle.