Agincourt was the first group project of English musicians Peter Howell and John Ferdinando, who started with a pair of home-recorded soundtracks for the local production Alice Through the Looking Glass and the amateur film Tomorrow Come Someday (both 1969).

In 1970, they teamed with singer Lee Menelaus in the folk-psych trio Agincourt and recorded Fly Away, an album of Howell numbers. They changed their name to Ithaca for the 1973 concept album A Game for All Who Know, comprised of six Ferdinando suites. Both albums appeared in limited quantities on self-press Merlin.

Working under the moniker Friends, Howell and Ferdinando teamed with singer Ruth Cubbin for the 1974 test-press Fragile.

Howell worked for years at the BBC Radiophonic Workshop and did music for Doctor Who and assorted educational programs. His five albums with Ferdinando became more readily available via reissues during the 1990s and 2000s.

Howell and Ferdinando first played together as teenagers in The Three Musketeers, an instrumental rock band formed by John’s older brother, Robert Ferdinando, and their mutual friend and classmate, Martin Garrett. They performed at parties and village halls and filtered through a sequence of names (The Tudor Mood, Merlin’s Spell, The Modern Guitar Quartet). As demand for vocal beat music spurred hostility toward their brand of rock, the band folded.

Howell hailed from Hove, where he collected cheap instruments during weekend trips to Hayllar’s Music Shop in Brighton. Fascinated with musical gadgets, he purchased a Revox 736, which had a (then rare) track-bouncing feature that allowed him to record then overdub during playback on the same tape.

Ferdinando grew up in Ditchling in a family of theatergoers. In 1966, he joined the backstage crew in a local production of The Deep Blue Sea. With his ties to theater and Howell’s knack for home recording and composition, they collaborated on soundtrack music for a local production of Through the Looking-Glass, and What Alice Found There, the 1871 sequel to Alice’s Adventures in Wonderland by Victorian children’s author Lewis Carroll.

1969: Alice Through the Looking Glass and Tomorrow Come Someday 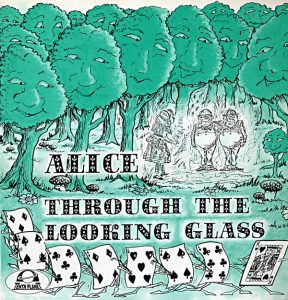 Howell and Ferdinando’s first release, Alice Through the Looking Glass, was pressed in a quantity of 50 copies as a memento for attendees of the Ditchling Player’s 1969 production. The album contains 12 Howell compositions, including eight performance extracts and four tracks recorded for the album. Howell substituted the White Knight character on the track “A-Sitting On a Gate.”

The duo recorded the album in Howell’s self-built studio at his parent’s house in Hove. They employed numerous sound devices (vintage telephone, party whizzer, duck call) and old instruments in Howell’s collection, including mandolin and autoharp. His father owned a Hohner electric organ that they wired to the Revox for several tracks.

Later in 1969, Howell agreed to write music for Tomorrow Come Someday, an amateur film by aspiring director Ian Hamilton, then a co-worker of Howell’s at the Glyndebourne Festival Opera. The plot centered on a village that was under the threat of motorway expansion. Howell and Ferdinando recorded the music with flutist Andrew Lowcock and engineer Brian Croney, who both worked on the pair’s subsequent albums. Vocals on the soundtrack were performed by the film’s amateur cast of actors.

As with the Alice soundtrack, Tomorrow Come Someday, was pressed in a limited quantity (under 100 copies) as a memento for those involved. Both albums were pressed by the English folk manufacturer Sound News Productions. They were later reissued by UK post-psych specialists Acme.

By 1970, the pair amassed a batch of originals with no ties to a movie or theater production. Howell hired singer Lee Menelaus, found through an ad in a local paper, to offer feminine contrast to their folk-psych material. They named their project Agincourt, the English translation of the Azincourt commune in Pas-de-Calais in northern France (site of the 1415 Battle of Agincourt during the Hundred Years’ War.) 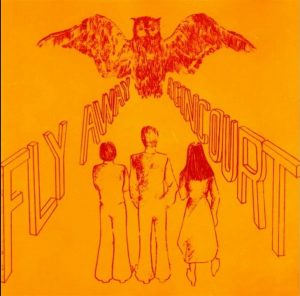 Agincourt’s sole album, Fly Away, appeared in 1970 on self-press Merlin Records. Howell wrote eight of the 13 songs, including “Though I May Be Dreaming,” “Lisa,” “When I Awoke,” “Barn Owl Blues,” and “Get Together.” Ferdinando contributed four, including “Take Me There” and “Mirabella.” They each wrote movements for the three-part “Through the Eyes of a Lifetime.”

They recorded Fly Away at Howell’s home studio, which he expanded to a second room with acoustic treatments after his parents vacated the property. Croney engineered and mixed the album.

Artist Veronica Ruddin designed the cover: a back-sketch of the trio before a path aligned with the name and title (vanishing perspective) and an owl hovering overhead. Lowcock plays flute on “Joy In the Finding,” “Dawn,” and “Kind Sir.” Drummer Brian Hussey appears on “Mirabella” and “Barn Owl Blues.”

Prior to its Merlin pressing, Agincourt issued a test-press of Fly Away on specialty small-press Fanfare. This version, which sports a finger-painted sleeve, has a louder mix and a different vocal take of “Get Together.”

Fly Away became popular in collector’s circles after its 1994 CD reissue by UK archivists Background, which also resurrected titles by Pussy, Forever Amber, Nirvana, Five Day Rain, Linda Hoyle, Hurdy Gurdy, and the Peruvian bands, We All Together, Pax, Laghonia, and Tarkus. In 2002, Acme reissued the album along with titles by Skip Bifferty, Bulldog Breed, and Human Instinct.

During the making of Fly Away, Ferdinando engaged himself in the songwriting process. This inspired him to write a concept album, influenced by the cosmic phase of the Moody Blues. He recorded the album with Menelaus and Howell at the latter’s Hove home studio over a six-month period (1972–73) during off-hours between work shifts. For this project, they chose the name Ithaca, named after the Greek isle where the Odyssey takes place in ancient mythology. 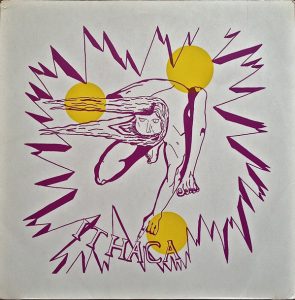 In 1973, Ithaca released the album A Game for All Who Know on Merlin. It features six multi-movement songs: “Journey,” “Questions,” “Feelings,” “Dreams” and the epics “Times” and “Journey II.” The first five are split into sub-sections and “Journey II” is subtitled after the album.

Additional guests on A Game for All Who Know include Hussey, Lowcock (flute and timpani), and backing vocalist Cement. The album also marked a Three Musketeers reunion with appearances by Martin Garrett on 12-string guitar and Robert Ferdinando on classical guitar (“Journey II”).

A Game for All Who Know first became readily available when Background reissued the title along with rare 1973 recordings by Sindelfingen and Gygafo. It has since been reissued by Acme on LP (2002, 2014) and CD (2004). In 2021, archivists Trading Places reissued the Ithaca album on vinyl along with titles by Sandy Coast, Steel Mill, Zior, Apple, Emerald Web, and Irma Thomas.

In 1974, Howell got a job as studio manager at the BBC. He invited his colleague, aspiring folk singer Ruth Cubbin, to sing select tracks on his final release with Ferdinando, the album Fragile under the group moniker Friends. 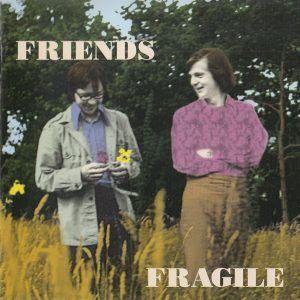 Fragile was pressed as a white-label acetate on H&F Recordings. It features 14 Howell originals, including “In the Morning,” “Take a Walk,” “Lonely Road,” and “One Sweet Day.” Two songs, “A Tale of Your Life” and “Once In a Winter Town,” are Howell/Cubbin co-writes.

Despite his newfound industry contacts and presence in London, Howell made no attempts at the time to secure a general release of Fragile. Instead, he focused on writing music for the Ariel Players, the BBC’s in-house theatrical group.

Fragile first became readily available in 2004 with an LP reissue on Acme. In 2005, Acme/Lion issued the album on CD with a proper cover (the pair standing in tall grass) and a booklet with an eight-page bio and vintage photographs. Both reissues omit two tracks from the 1974 test-press.

The duo’s last-pressed recordings were two 1975 10″ acetates on H&F, credited to Howell, Ferdinando, and singer Marcia Jackson. One features six cuts: “On Your Doorstep,” “Instrumental,” “Feeling Free,” “Silver Moon,” “Walking In a Dream,” and “Just Music.” The second pairs those last three cuts with “Ghosts From the Celluloid” and “Fizziology.”

Howell and Ferdinando concluded their partnership with a series of electronic recordings for five Whizz Theatre shows. The music remains unavailable at large. According to Howell, they employed “early synthesis techniques… on vintage electronics” on the Whizz Theatre recordings.[1]

Ferdinando became a chartered surveyor and moonlighted for years as a bar band bassist.

Howell parlayed his position at the BBC into a quarter-century run at the Radiophonic Workshop. In 1978, he released the instrumental album Through a Glass Darkly on BBC Records, credited to Peter Howell & The Radiophonic Workshop. It features five short tracks (incl. “The Astronauts,” “Wind In the Wires”) and a 19-minute title-suite, subtitled “A Lyrical Adventure.”

Howell’s most noted work at the BBC was on the perennial sci-fi series Doctor Who. During season 12 (1974–75), he made incidental music for the serials Revenge of the Cybermen and Planet of Evil. In 1980, he recorded an updated version of the show’s title theme, first aired on the 18th season serial The Leisure Hive and used for the next three seasons.

Other credits during his Radiophonic tenure include music for The Shock of the New, an eight-part series on modern art (1978–80); The Machine that Changed the World, a five-part series on computer history (1992); and for the “Badger Girl” and “Spywatch” stories of the children’s educational program Look and Read. He also did the 1984 indent music for BBC Video.

In 2019, Fly Away and A Game for All Who Know were compiled with most of Fragile and the two 1969 soundtracks on the multi-disc compilation Ithaca, Agincourt & Other Psych-Folk Fairy Tales, released in a run of 500 copies (LP and CD) by the Spanish specialty label Munster Records.

In 2021, Howell published his autobiography Radiophonic Times via Obverse Books.

Tommie Young
Tommie Young is an American soul singer from Dallas who released the album Do You Still Feel the ...
Locomotive
Locomotive was an English brass-rock/psych band that was active with multiple lineups between 1966 a...
Elmer Gantry's Velvet Opera
Elmer Gantry's Velvet Opera was an English psych-rock band that released multiple singles and a 1968...
The Transmitters
The Transmitters were an English post-punk band that released two singles and the album 24 Hours on ...
Triangle
Triangle were a French sax-rock/psych band that debuted with a pair of singles on Odeon in 1969, f...