Affinity was an English jazz-rock/psych band that released a self-titled album on the Vertigo “swirl” label in 1970. Vocalist Linda Hoyle followed up the band with a 1971 solo album Pieces of Me. Drummer Grant Serpell resurfaced in 1974 with vaudeville-popsters Sailor.

Affinity stemmed from the US Jazz Trio, formed in 1965 at University of Sussex in Brighton by keyboardist Lynton Naiff, contrabassist Nick Nicholas, and drummer Grant Serpell, all science students. After graduating, Serpell cleared out for bassist/drummer Mo Foster of the University Jazz Quartet. With a set comprised of jazz covers, the Foster lineup performed in the debating chamber at Falmer House, UoS, and various campus bars.

Naiif soon joined Serpell in the psych-rock combo Ice, which issued two 1967/68 Decca singles: “Anniversary (of Love)” (b/w “So Many Times”) and the eerie/shimmery “Ice Man” (b/w “Whisper Her Name (Maria Laine)“). They recorded an album’s worth of live tracks/demos and masqueraded as Russell’s Clump. Despite success, they disbanded in mid-1968.

Naiif and Serpell reteamed with Foster, who switched to bass. They expanded to a quintet with guitarist Mike Jopp and singer Linda Hoyle, then a teaching major. Their name came from the 1961 album Affinity by Canadian jazz pianist Oscar Peterson. Jopp secured a loan from his father that allowed them to buy new equipment, including a Hammond M102 organ and a Gibson EBO bass guitar.

Affinity made its live debut on October 5, 1968, at the Revolution Club in Bruton Place in Mayfair, West End. A subsequent show was broadcast on BBC Radio Jazz Club. Upon hearing the band, impresario Ronnie Scott gave them a residency at his popular Soho jazz club. They toured Scandinavia and performed on the BBC2 music program Disco 2. Philips signed Affinity to its underground subsidiary Vertigo. 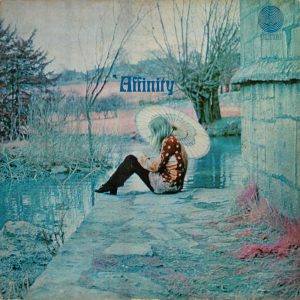 Affinity was recorded between 1968 and 1970 at Trident and Island Studios. The cover shows a turquoise-saturated photo of Linda holding a Chinese umbrella, perched before a duck pond. The image was captured by Keith MacMillan, Vertigo’s in-house photographer who also shot covers for Colosseum (Valentyne Suite), Rod Stewart (An Old Raincoat Won’t Ever Let You Down), Beggar’s Opera (Act One), and Black Sabbath (ST, Paranoid). The inner-spread has lyrics and a xeroxed photo of the band.

Musically, Affinity blends lounge jazz and psychedelic sounds. The more aggressive numbers (“I Am and So Are You,” “Three Sisters”) serve as missing links between Julie Driscoll and Trinity and Catapilla. On some of the hazier cuts, Affinity presages the 1971 release by Tonton Macoute. Affinity’s misty, haunting blend also resembles spiritual jazz, as purveyed by select American acts.

Affinity first appeared on Vertigo’s swirl label, cat. #6360 004, preceded by titles from Gracious (Gracious!) and Magna Carta (Seasons) and directly followed by albums from Uriah Heep (…Very ‘Eavy Very ‘Umble…) and Bob Downes Open Music (Electric City). “I Wonder If I Care as Much” was issued on a swirl label 7″, backed with “Three Sisters.”

Later in 1970, Affinity issued a non-album single featuring two covers: Laura Nyro‘s “Eli’s Coming” backed with another Hull composition, “United States of Mind.” Both tracks were later added to the first several CD reissues of Affinity. In 2007, Air Mail Archive (Japan) reissued Affinity as a 15-track double CD. In addition to the 1970 album and single, the set includes two unearthed originals (“Yes Man,” “Little Lonely Man”) and covers of The Beatles (“I Am the Walrus”) and Carole King (“Long Voyage”).

“Buying a toy, a passion I need so badly
He’s my Mr. Joy, waiting for me so gladly
I’ll wind him and when I’m alone, feeling sadly”

“I Am and So Are You” (3:31): Guttural organ/guitar riff in F. Stray brass; punchy sax. Soulful vocals, belted yet laidback.

Kingdom Come
Kingdom Come were an English space-rock/psych band that released three albums on Polydor between 1...
Anthony Moore
Anthony Moore (born Aug. 13, 1948) is an English musician and songwriter from London who recorded ...
Uncle Chapin
Uncle Chapin were an American brass-rock band from New York that released a self-titled album on ...
Billy Cobham
Billy Cobham (born May 16, 1944) is a Panamanian-American jazz-rock drummer who played in the band...
Catalyst
Catalyst was an American jazz-funk band that released four albums between 1972 and 1975. Their fir...