Aardvark was an English post-psych organ rock band from the Midlands that released a self-titled album on Deram in 1970.

Aardvark had its roots in psych-rockers Rusty Sunday, which featured bassist Stan Aldous (ex-Odyssey) and teenage drummer Frank Clark. Through an ad in Melody Maker, they found organist Steve Milliner, a Coventry native who played in numerous R&B/beat groups. Singer Dave Skillin completed the lineup, having once fronted a band with Keith Meehan (brother of original Shadows drummer Tony Meehan). 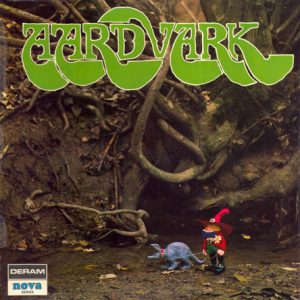 Aardvark was released in 1970 on Deram, the underground division of Decca. It features eight originals, including “Many Things to Do,” “Copper Sunset,” “The Greencap,” and “The Outing.” Milliner plays a large arsenal of devices, including organ, piano, celesta, vibraphone, marimba, and recorder. Skillin wrote everything except “Once Upon a Hill,” credited to Aldous. Musically, the album veers between high-velocity organ rock (Deep Purple, Quatermass) and free-form passages in the Krautrock vein.

“Put That in Your Pipe and Smoke It” (7:35): Stormy organ jam with torrential percussion and velocity bass. Soon becomes a tradeoff of drumrolls and Hammond glissandos.

Skillin collaborated with the band Home on their second and third albums, writing the lyrics and liner notes for their 1973 release The Alchemist. In the early 1980s, he cut a single with Pedi and The Lions and produced an EP for punk act Dawn Patrol.

Aardvark was first reissued in 1985 with the title Put That In Your Pipe and Smoke It ‎on See For Miles Records. Since 1990, it has been reissued more than a dozen times, mostly on unofficial eastern specialty labels. Skillin and Milliner resurrected the Aardvark nameplate for the 2016 disc Guitar’d ‘n’ Feathered on self-press Skillmill Record Co.