The Third Avenue Blues Band (spelled numerically after their first single) was an American brass-rock/soul sextet that released three singles on MCA-subsidiary Revue in 1968/69, collected with other material on the 1970 album Fantastic.

The band formed in Oklahoma City when trumpeter Mark Underwood and saxophonist Bob Beasley teamed with guitarist/bassist Hadley Hockensmith, organist Harlan Rogers, and drummer Bill Maxwell. Underwood played in The Serfs, a jazz-rock/psych band that released one album, The Early Bird Cafe, in 1969.

Singer Harold Jones completed the Third Avenue Blues Band, which signed to MCA-subsidiary Revue. In 1968, they released their first single, “It’s Got to Be Love” (b/w “If You Don’t Love Me”), both written by Rogers. It was followed in 1969 by the Jones-composed “Don’t Make Me Laugh” (b/w Hockensmith’s “Pipedream”), released as 3rd Avenue Blues Band. Their third single, a funky cover of Joe South’s “Rose Garden” (b/w Rogers’ “Come On and Get It”), appeared later that year. 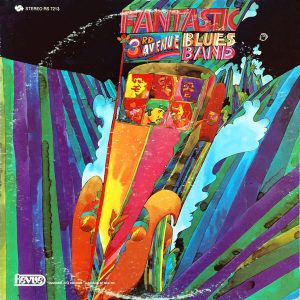 Their album, Fantastic, appeared on Revue in 1970. It features 11 songs, including all the aforementioned single sides (except “Pipedream”). Other tracks include Rogers’ “I Know About Love,” Hockensmith’s “Hawk’s Blues,” and covers of the Isley Brothers (“It’s Your Thing”) and Eddie Harris (“Mean Greens”). The album was produced by Charlie Carey.

Maxwell became a fixture of Texas faith-based label Light Music and joined its flagship act Andraé Crouch & The Disciples. In 1973, he reunited with Hockensmith and Rogers in the jazz-funk/psych combo Sonlight, which also served as the instrumental nucleus on three albums by Light Rec. gospel singer Danniebelle Hall. During the 1980s, the team recorded four albums as part of the jazz-rock ensemble Koinonia.

Beasley re-linked with Rogers and Hockensmith on soul-faith albums by the Don DeGrate Delegation and Sherman Andrus.

Clark Hutchinson
Clark-Hutchinson was an English jam-rock duo comprised of keyboardist Andy Clark and guitarist Mick ...
Sam Apple Pie
Sam Apple Pie was an English blues-rock band that released a self-titled album on Decca in 1969. The...
Brahman
Brahman were a Canadian hard-rock band from Vancouver that released a self-titled album on Mercury...
Kaleidoscope
Kaleidoscope were an American psych-rock band from Los Angeles that released four albums on Epic ...
Sly & The Family Stone
Sly & The Family Stone were an American soul-funk band from San Francisco, Calif., that relea...