Taking Care of Business is an album by American jazz-funk/soulsters the Ted Coleman Band, released in 1980 on JSR Records. 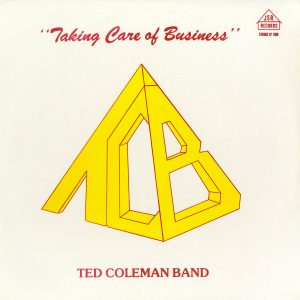 “Due Consideration” is marked by rising/falling 3rds within a two-chord (G/Cm) verse sequence. An octave bassline/hi-hat slide accents the chordal arc (E♭/Dm/Gm) of the bridge. The verse theme is reimagined with an enveloped guitar solo, followed by a tingle-toned vibraphone break over both sections. A reprise of the track carries out side one, minus the low-key vocals.

“If We Took the Time (Where Do We Go From Here)” starts on vibe encircled half-step (Dm/Cm) with subtle wah-wah chording. Sunny synth tones beam amid Coleman’s laidback vocals. A vibe solo elongates the mid-section over chordal peaks and valleys (Gmaj7/Cm). During the cocktail guitar break that follows, tight notes alternate with bendy sustains over a samba-like rhythmic pattern.

Naked, glowing vibes over a G/A♭ half-step summons “What a Lovely Way To Spend a Lifetime,” a samba-soul number that shuffles through a sequence of maj7 keys. A clean, scaly guitar tone emphasizes the track’s penultimate section.

A mambo undercurrent drives “Samba De” through a sprightly sequence of maj7-soaked flats (E♭/B/A♭/E) in the verse, bisected by a brisk two-chord passage (Gm/Cm) in the bridge. The percussive layers become evermore dense as the track nears its climax.

On Taking Care of Business, the remote micing of select instruments and Coleman’s low-key vocals recall the seminal works of Shuggie Otis. Style-wise, the vibe-laden arrangements and soft, sunny mood of the tracks are comparable to prime Roy Ayers.

The Selecter ‎– Too Much Pressure (1980)
Too Much Pressure is the first of two albums by English Two Tone/ska septet The Selecter, released i...
Barbra Streisand ‎– Guilty (1980)
Guilty is an album by vocalist/entertainer Barbra Streisand, produced by Barry Gibb and released in ...
Diana Ross ‎– Diana (1980)
Diana is the tenth solo studio album by American vocalist/entertainer Diana Ross, produced by Nile R...
Diamond Head ‎– Lightning to the Nations (1980)
Lightning to the Nations is the debut album by English metal band Diamond Head, released in 1980 on ...
John Foxx ‎– Metamatic (1980)
Metamatic is the debut solo album by former Ultravox frontman John Foxx, released in 1980 on his tra...
Magazine ‎– The Correct Use of Soap (1980)
The Correct Use of Soap is the third album by Mancunian maximalist rockers Magazine, released in 198...
Freeport ‎– Duanelessness (1980)
Duanelessness is an album by German jazz-rock combo Freeport, released in 1980 on View. Track...
Reckless ‎– Reckless (1980)
Reckless is the debut album by the namesake Canadian hard-rock band, released in 1980 on EMI. The al...
Group 87 ‎– Group 87 (1980)
Group 87 is the first of two albums by the namesake American studio-based supergroup. Released in 19...
Kate Bush ‎– Never for Ever (1980)
Never for Ever is the third album by English vocalist/songwriter/performance artist Kate Bush, relea...
Ali Thomson – Take a Little Rhythm (1980)
Take a Little Rhythm is the first of two albums by Scottish art-pop musician/songwriter Ali Thomson,...
MX-80 Sound ‎– Out of the Tunnel (1980)
Out of the Tunnel is the second album by American avant-garde/art-punk band MX-80 Sound, released in...