Coincide is the third headlining album by American free-jazz saxist Dewey Redman, released in 1975 on Impulse! The album was recorded on September 9–10, 1974, at N.Y.C.’s Generation Sound Studios.

Violinist Leroy Jenkins and bassist Norris Jones (aka Sirone) were cohorts in the Revolutionary Ensemble. Trumpeter Ted Daniel and drummer Eddie Moore round out the combo. All except Jenkins appeared on Redman’s prior Impulse! release The Ear of the Behearer (1973). 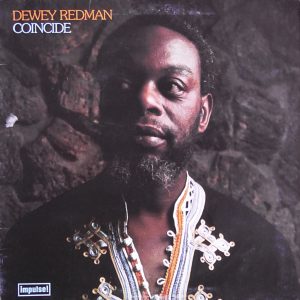 “Seeds and Deeds” begins with a mangled flurry of sax and trumpet. Redman’s fractious flutters are brisked along with rapidfire drums and bass. Jenkins takes hold at 1:30 with manic runs of violin. The three soloists trade moments, followed by an aleatoric bass solo and grand recapitulation.

“Phadan Sers” features Redman alone on zither, which he plucks and strums into an entangled, echoey drone.

“QOW” takes shape around a circular bass ostinato in A, swiftly augmented with melodic sax. A jumpstart at 1:50 prompts Sirone to start running around the reed, which soon goes free form amid the cymbal-laden fills of Moore. Redman scans the highs and lows of his instrument with increased sharpness over a lengthy stretch. A bass solo and drum spotlight precede a reinstatement of the opening theme for the stately closeout.