Silver is a studio album by English pop/rock vocalist Cliff Richard, released in 1983 on EMI Records. Though derived from the album’s opening cut, the title also paid reference to the singer’s “Silver Jubilee,” as 1983 marked his 25th year in the music business. In the U.K., the album was briefly issued as a double album with the second record comprised of cover versions of ’50s rock ‘n’ roll hits, later issued as a separate LP. 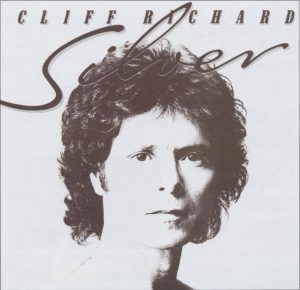 Videos were made with choreographed dance scenes for the Mike Batt ballad “Please Don’t Fall in Love”, the hi-tech/uptempo “Baby You’re Dynamite” and lead-off single “Never Say Die (Give a Little Bit More)” — subtitled after the song’s prominent chorus line, through not to be confused with the namesake song from the earlier I’m No Hero album. Though not planned for single release, “Ocean Deep” was ultimately issued as such by popular demand and has since become a fan favorite in various territories.

Stateside, Silver was titled Give a Little Bit More and given an altered tracklist, swapping “Front Page” for Richard’s rendition of Ritchie Valens’ “Donna.”