The album was the first of four on Mercury for Earland, who had just wrapped a six-year, 10-album stint on Prestige. His act would be renamed after this album for his subsequent two releases, The Great Pyramid (1976) and Revelation (1977), which were both credited to Charles Earland and Odyssey. 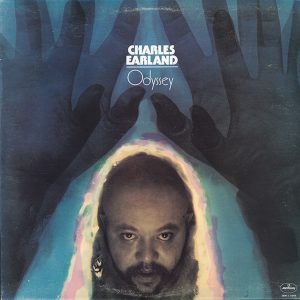 “Intergalactic Love Song” begins with chirping birds and soaring ARP, soon joined by a waving bassline. The tonality reclines in Fmaj7 with an alternating emphasis on the 5th (C) and 6th (D) notes of the scale. At 1:05, the cadence tightens with clipped guitar, maracas and staccato Fender.

“Sons of the Gods” blasts in with aggressive belting over a raunchy half-step (A♭/G) guitar riff. The verses shuffle through a hi-hat sliding chordal descent from E♭, landing in Gm with a triad/bassline duel. Steamy synths and slashing strings color the proceedings.

“Cosmic Fever” rushes in on F with hovering ARP and Latin percussion over a bassy rhythmic bed. As the track advances, Michał Urbaniak weaves silky strands of violin amid Earland’s Echo-plex.

“We All Live in the Jungle” kicks in with an octave-circling bassline in Dm. Earland lays down a Fender/Clavinet under-bed, punctuated with sliding hi-hat, wah-wah chords, billowing sax, and jive harmonies.

“From My Heart To Yours” presents a rounded theme in Dm with rising/falling 7ths. The warm, fuzzy tones of guitarist Jack Turner bookend the piece with scaly complements to the main melody.

At the dawn of “Phire,” sunny string-synths and Fender droplets herald a searing solo by John Abercrombie. Smooth tones accent the ongoing structure of E♭maj7/Dm/G/Cm, which underlays the impassioned vocals of Arthur Grant on this flowery soul ballad.

Fluorescent ARP strings and howling sounds beacon “Journey of the Soul,” which swells into a mid-tempo cosmic jam in D♭m. The bridge (D/Emaj7/D/Cmaj7) periodically lifts everything until the cadence tightens at 3:36. The structure resumes with accelerated organ runs by Earland.