Atomic Rooster is the debut album by Atomic Rooster, first released in March 1970 on B & C (U.K.) and Fontana (Europe). 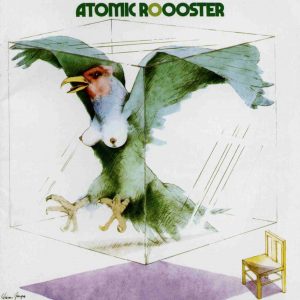 Two versions exist of the album. The first — recorded by the original lineup of keyboardist Vincent Crane, bassist/singer Nick Graham, and drummer Carl Palmer — has no guitar. Soon after that release, Crane hired guitarist John Du Cann, who added guitar to four tracks. Upon Graham’s departure, Crane substituted organ pedals for bass and had Du Cann redo the vocals. This partially re-recorded version appeared in mid-1970 with no information in the credits about the changes.

Atomic Rooster is their first of two albums released in 1970. Their second, Death Walks Behind You, appeared in September. By then, only Crane remained from the original lineup. That March, Graham joined  Skin Alley.  Months later, Palmer co-founded the super-trio Emerson Lake & Palmer.

Atomic Rooster had been active for six months when they recorded their debut album. They formed in the summer of 1969 when Crane and Palmer, both freed from the Crazy World of Arthur Brown, hired Graham, a newcomer to the scene.

Crane and Palmer recorded one album in the Crazy World of Arthur Brown, which charted with the 1968 psych single “Fire.” Palmer recorded earlier with Craig, an R&B/beat group that issued two 1966 Fontana singles, including the much-comped drumroll fest “I Must Be Mad.”

Their time with Arthur Brown was erratic. Crane suffered a nervous after a US tour with Crazy World in late 1968. He spent three months in a hospital during winter-spring 1969. During their next stateside tour, Brown disappeared to a commune and folded the band in June 1969. Crane and Palmer set about forming a new band and tapped ex-Rolling Stones guitarist Brian Jones for the project just days before his death. Rather than find another suitable guitarist, they opted for a trio format of organ, bass, and drums. This lineup, though temporary, aligned them to a wave of guitar-free post-psych bands, which also included Quatermass, Rare Bird, Aardvark, and Van der Graaf Generator.

Atomic Rooster, named after the Year of the Rooster (1969) in the Chinese calendar, played its first concert at London’s Lyceum Theatre on August 29, 1969. The opening act on that date was Deep Purple, which had just entered its Mark II phase with singer Ian Gillan and bassist Roger Glover. Purple, a charting act stateside with three albums to their credit, had yet to score a homeland breakthrough, hence the billing order.

Atomic Rooster recorded their debut album between December 1969 and January 1970. The final tracklist featured two group-written numbers (“Banstead,” “Decline and Fall”), a John Mayall cover (“Broken Wings”), and five Crane originals: “Friday the 13th,” “And So to Bed,” “Before Tomorrow,” “S.L.Y.,” and “Winter.”

Atomic Rooster is a self-produced effort apart from two songs, “Friday the 13th” and “Broken Wings,” which were produced by Tony Colton, a writer and arranger with several mid-’60s Pye and Decca singles to his name. Most recently, he fronted the folk-psych act Poet and the One Man Band, which issued a 1969 album on Verve Forecast. As a producer, he worked on the two albums by Irish power-trio Taste, the starting vehicle of guitarist Rory Gallagher.

Around the same time as Atomic Rooster, Colton worked with Yes on their second album Time and a Word. Despite his friendship with Yes singer Jon Anderson, Colton’s decisions (namely his appointment of string arranger Tony Cox) polarized the Yes camp and precipitated the exits of guitarist Peter Banks (who formed Flash and later Empire) and keyboardist Tony Kaye (who left in late 1970 after sessions wrapped on their third release, The Yes Album). Colton subsequently formed and fronted Heads Hands & Feet, a roots-rock band that released three albums between 1971 and 1973.

Though not stated in the credits, the Atomic Rooster sessions presumably took place at Advision Studios in central London, the site of contemporary Colton projects.

The front cover of Atomic Rooster shows a green eagle-rooster hybrid with women’s breasts. It’s seen open-winged yet captive in a glass cube, suspended above a wooden chair. The name, displayed in bold sans serif font, is color-matched to the bird with an additional “o” in a lighter lime hue (ROOOSTER). The image was designed by Adrian George, who also did the poster insert for The Who Sell Out and the cover to the 1971 album by Barbadian post-psychsters Luv Machine.

On the back cover of Atomic Rooster, jade-tinted, capsulized face shots of each member float on a lime background. The bird face emerges in the upper-right.

Most issues of Atomic Rooster appear in a single sleeve apart from the issue on Stateside (Japan), which houses the album in a gatefold with a photo-negative inner-spread and printed lyrics (in Japanese).

In Australia and New Zealand, Atomic Rooster was released on Interfusion with the breasts replaced by a regular bird’s chest. The South African pressing (Fontana) keeps the breasts but erases the nipples.